From a waiter working in Singapore to becoming a Harvard graduate

I recently graduated with a master’s degree from Harvard University. Throughout the entire week, countless speakers and dignitaries – including Mark Zuckerberg and John Kerry – told us that I (and my classmates) would be the future leaders of the world.

But just seven years ago, it did not seem likely that I could pursue a college degree, let alone a graduate degree at Harvard. Growing up, I had always scoffed at academics and their “expert advice” because they often seemed so divorced from my reality.

But after spending time in the ivory tower, I have come to realise a simple truth: the ivory tower needs us more than we need it, and as a society we should use it to our advantage.

I grew up in Singapore, a tropical city-state famously known for having the world’s highest concentration of millionaires. My father used to have a million-dollar business, but that changed after the Asian financial crisis. Growing up in lower-middle class Singapore, buying a can of soda was a luxury, and we were often cash-strapped by the end of the week.

To help with the finances, I began working at the age of 12 as a part-time tutor. When I turned 14, I worked as a waiter at the Grand Hyatt hotel.

Working also meant long commuting hours and that nurtured a habit of reading. Living in a country that divides people into “smart” and “not smart”, I devoured Howard Gardner’s Theory of Multiple Intelligences. He put into words what I always thought was an arbitrary determination of human ability: a “smart” person usually refers to nothing more than someone who did well on standardised testing. I emailed Professor Gardner to share with him his impact on me. To my surprise, he responded to my email, and even shared with me his thoughts on the Singaporean education system.

The top 50 universities by reputation 2017

His kind and prompt reply moved me. The fact that a professor from Harvard would reply to a query from an average Singaporean teenager planted a seed in my mind: maybe these experts were not as self-indulgent and divorced from reality as I previously thought.

I entertained the possibility of maybe, one day, applying to Harvard. But when I told my parents about this, they smiled. With a beaten tone and cracked voices, they said: "It doesn’t do any harm to try, just try your best.”

Neither of my parents had a college degree and no one in my extended family attended an Ivy League college. My parents knew it was important for their son to dream, but they also knew that the odds were incredibly slim.

As I applied to Harvard, two messages rang in my head: firstly that I’ll never get in, and secondly that I knew my $75 application fee was going to go waste. But it didn't and I was accepted.

The idea of an elite institution being divorced from reality has been the message of this past year – popular majorities all around the world find themselves not “fitting in” to the models and values espoused by supposed elites. I’ve worked my socks off to get here, but I was suddenly accused of being a part of the elite, told that facts shouldn’t be trusted, and that expertise is shameful.

This sentiment was particularly stark on the morning of 9 November 2016, the day after the US presidential election. Many of my friends started posting on Facebook that “Harvard elites” were to blame for the death of globalisation because their “elitist” ideas forgot the middle class.

I am familiar with being distrustful of “experts”, but this time, I was part of the out-of-touch “establishment”.

Studying at Princeton University
Navigating Yale University
Life at the University of Cambridge
Dispelling the myths around elite universities
Brits in America: Heading to Harvard

To my peers back home, I was now an out-of-touch scholar. However, in my classes I felt equally isolated: I was that Asian student who would raise questions at the Kennedy School Forum about the savior complex, interrogate colleagues who still insist that China is a communist country, and remind people that the Vietnam bombing is a political reality for people in my region, not just some political miscalculation from which we can easily move on.

However, among my fellow students we had many “let’s grab a coffee, I want to learn more” moments and I discovered that the core of a university’s work in creating globally aware and culturally sensitive changemakers lies in its students, not just its professors.

The ivory tower is not decrepit, old and archaic; it’s alive, its people are dynamic, and the communities represented here are diverse. Our duty is to use our academic learnings and newfound expertise to help mend the many problems in this troubled world.

From a waiter working in Singapore to becoming a Harvard graduate, walking in those crimson robes on commencement day, I remembered the arguments and frustrations in a classroom where we all struggled to “fit in”. And as I walked among inspiring classmates who are doing their part to fix our broken world, I hope I’ll be able translate my knowledge and skills into inspiring positive social change.

If there’s one lesson I took from Harvard, it is this: in the same way that we can possess expertise without claiming to be an expert, we can all be in an elite institution without being elitist. 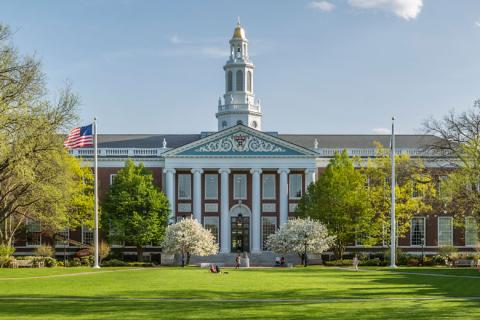 Don't think that Harvard is just for a certain group of elite students, writes one recent master's graduate from lower-middle class Singapore