Universities across the world have their own exam traditions and superstitions that come with the promise of exam success.

Whether you believe them or not, it's interesting to see what kind of traditions have been passed down across generations of students on university campuses.

However, it's important to note that you won't ace your exams simply by following these superstitions - nothing can replace hard work, preparation and a few good study sessions.

Hanging in the halls of Royal Holloway University is a painting by Edwin Landseer, showing two polar bears in a wreckage of a ship. It represents Sir John Franklin’s lost expedition. The official name of the 1864 painting is “Man Proposes, God Disposes”.

The painting is shrouded in myth and all new students are told the story of a student who stared into the eyes of the polar bear for too long. Before they went completely mad, they etched into their exam paper ‘the polar bears made me do it.’ Fear of the power the painting had to cause you to fail exams or worse began to grow and in the 1970s one student refused to sit next to the painting for their final exam. Staff ran to find something to cover it and located a large union jack flag. Since then, every year the painting is covered just before exams begin every year and older students share the story with new undergraduates.

Near the middle of the Columbia University campus is Minerva, a statue of the goddess of wisdom, known as “Alma Mater.” Designed by Daniel Chester French in 1901 and installed in 1903, the statue represented Colombia’s position as an educational institution.

The statue is now a well-known symbol of the college and is surrounded by superstition. The legend goes that inside the folds and pockets of her robe there is a hidden owl. If you can find it on your own, it is said you get A grades on all your assignments and exams and become valedictorian.

Trinity College Dublin has several superstitions. However, the most famous is that of the Campanile. The Campanile is a bell tower that sits in the middle of the Front Square on the campus grounds. It is an iconic landmark that draws a lot of attention for its size and design.

The superstition goes that if a Trinity student were to walk underneath the bell tower as it tolled, they would fail all their exams. Students avoid it throughout their time at the university and only once they have graduated do they allow themselves to walk through the shortcut across campus without fear.

Yale University is known for its Ivy League reputation, its excellent drama department (Meryl Streep is an alumnus) and its stunning campus. But it also has a superstition that many students take part in when exam season arrives.

Located on the old campus of Yale is a bronze statue of Elihu Yale, whom the university was renamed in honour of in 1718. The statue represents his contribution to the university but for many students, it is a symbol of good luck. It is said that during exam season if you rub Elihu Yale’s toe, you will be granted good luck for your finals.

As soon as first years arrive at the University of St Andrews, they are taught the story of St Salvador’s unlucky PH stone. Outside the entrance to the St Salvador’s Quadrangle, there are paving cobblestones grouped together to spell the letter PH. The letters represent a heretic named Patrick Hamilton who was burned at the stake right where the stones are located.

It is said that if any student steps on those stones, they will fail their exams. Even worse it is said if you are in the final year of your degree, you will lose it completely. Students avoid the “Unlucky PH” throughout the year, but especially during exam season. If a student does accidentally step on it, there is only one way to potentially remove the curse. The student must go and jump into St Andrews Bay to try and wash the curse away.

In 1908, the Joseph Chamberlain Memorial Clock Tower was installed on the University of Birmingham campus and has fondly been referred to as “Old Joe” by students since. Looming over the students studying there, Old Joe represents a superstition passed down for generations. It is said that should a student pass beneath the tower as the bell chimes, they will fail their degree. Students will often celebrate graduation by walking under the tower confidently.

The main campus of Brown University has a grand entrance, known as the Van Wickle Gates, that leads onto the Quiet Green. The gates have remained the symbol of the university since their installation in 1901. The gates only open twice a year due to a long-standing superstition amongst students.

It is said that the gates open during Convocation each year to welcome first-year students onto campus. They are opened once again at the end of the year to allow graduating students to pass through during Commencement. Superstition surrounds the gates and students believe that if they pass through the gates more than twice in their time at Brown, they will be cursed with bad luck from that moment for all eternity. Some students will not go near them during exam season to ensure they do not pass through by accident and can pass their exams without a curse. 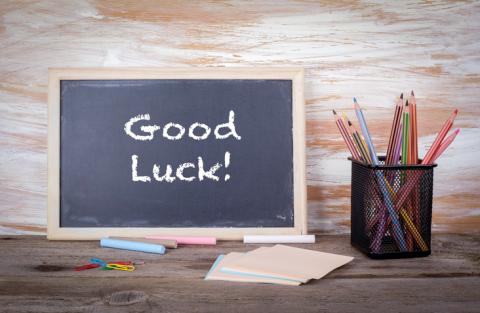 University life comes with some stress, exams, tests, coursework, deadlines, you name it. However, some universities also have superstitions that students learn of when they arrive that may help or hinder their exams.