From Kenya to the US: my experience of doing a master’s degree at a HBCU

I was born and raised in Kenya and did my undergraduate degree in gender and development studies at Egerton University.

While growing up, the idea of studying in the US was something I could only dream about. It just didn’t seem possible.

That is until I found out about historically black colleges and universities (HBCUs) in the US. My dad attended a conference in Florida and later travelled to Baltimore, Maryland to visit friends who told him all about Morgan State University, a HBCU in Baltimore.

When my dad returned to Kenya he encouraged me to find out more about Morgan State University and consider applying for a master’s degree there.

At the time I didn’t really appreciate the concept of HBCUs; my main motivation was simply to attend a college in the US.

It was only when I arrived on campus that I fully understood what HBCUs have to offer. I was taken aback by the racial demographics at Morgan State. From the classroom to my student accommodation, the black community was represented at every level. This was exciting to me because it meant I could immerse myself fully in college life without ever feeling like my skin colour made me stand out.

However, I struggled initially with having a different accent. I often had to back up my speech with gestures and signs to avoid misunderstanding.

It also took me a while to understand that words may mean different things in the US to what I was used to in Kenya. I remember one day I ordered chips and a Coke in a restaurant because that was all I recognised on the menu – only to be presented with a bag of crisps. I had been expecting French fries because we call them chips in Kenya. That was a little bit embarrassing.

As time went on I began to overcome some of these challenges. I attended a lot of campus activities with domestic students, which helped me acclimatise to the accent and culture. I also began working in the bookstore on campus, which enabled me to interact with lots of different people.

Outside university, I’ve travelled to many places in the US, such as New York, Ohio and Chicago, which was another useful way to widen my exposure to American culture.

Once I had settled in to university life, I stood for the position of international students’ representative on the graduate student association and got elected. In this role I run a scheme to help international students transition easily into a new culture by pairing them up with domestic students.

I have found that Morgan State offers a lot of support for international students, particularly in terms of funding. For instance, I only had to pay tuition fees in full for the first semester and have received scholarships and graduate assistantships for the remaining semesters. After talking to other international students, this level of support seems quite common at HBCUs.

Overall, I have found an HBCU the perfect place for international students like me.

Even though there are some slight challenges and culture shock in the beginning, the support available to help you settle in eases the change significantly.

On reflection, I know I made the right choice with Morgan State University, despite being unsure initially. I would encourage any prospective international student who dreams of studying in the US to apply to an HBCU. 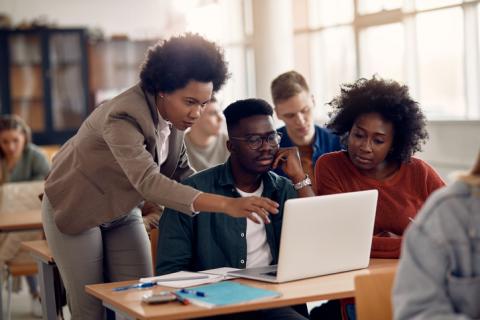 Collins Oswago, studying at Morgan State University, reflects on his experience dealing with culture shock as a student from Kenya at a historically black college in the US