Texas is the second largest state in the USA. Known as the "Lone Star State", Texas covers a huge area in the deep south of the United States.

The state has a wide range of landscapes and environments, from the seaside towns on the gulf coast to the plains of the panhandle in the North, including swamps, rolling prairies, forests. The western mountains and the deserts form the backdrop to the cowboy films that give Texas its "Wild West" image.

Houston is the city with the highest population and home to many of the most prestigious universities in Texas.

Texas has its own unique culture, food and music with a long history of cultural exchange across the border with Mexico. Austin is the state capital and cultural heartland, famous for its music and arts scene.

There are about 34 separate public higher education institutions in Texas, several of which rank highly as research institutions.

If you want to study in Texas you need to find out which university is right for you. Here are the best universities in Texas based on the Wall Street Journal/Times Higher Education US College Rankings 2022.

Rice University is a private research university in Houston, Texas.

Rice’s prestige comes from the quality of its applied science research into fields such as space science, artificial heart research and nanotechnology. The university consistently ranks extremely highly in the global rankings for its material science research.

Rice’s admissions process is selective, part of the reason for its small student body. But the community is diverse; 12 per cent of the undergraduate population are international students.

2.University of Texas at Austin

UT Austin ranks highly among American public universities and has a global reputation for the quality of its teaching and research.

The student population is almost 50,000, putting it in the top 10 largest single campus enrolments in the US.

Students study a huge range of subjects at both an undergraduate and a postgraduate level, and the university is home to many prestigious research institutes.

UT Austin is one of the top recipients of research grants in the country, research that has gone on to produce hundreds of patents and dozens of start-up companies.

The best universities in Texas 2022 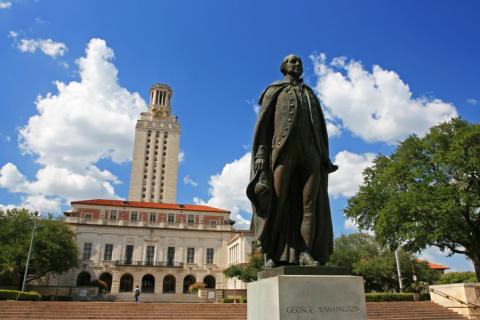