Best universities in the South of the United States 2022

Country music, BBQ food, a river (and its matching state) that no one can spell, cowboys...these are some of the things that have long defined the Southern states of the US.

However, in reality, each of the 16 states in the south of the country has a unique identity and culture that can appeal to a diverse range of students. From the sunny beaches of Florida to the thriving music scene in Tennessee and delicious Creole food in Louisiana, there is so much going on that it might be tricky for you to pick which state to go to.

Plus the higher education system in this little corner of the States is pretty great, with some of the country’s best universities taking up residence there.

These are the best universities in the South of the United States based on data collected for the WSJ/THE US College Rankings 2022.

With a number of pretty beaches and quaint towns, Delaware is a solid choice if you are looking for a slower pace of life.

Although there is a small selection of universities, the top university, the University of Delaware, is ranked in the top 200 of the US College Rankings. Three alumni were signatories of the Declaration of Independence.

Florida is the US’ southernmost state, and is known as the Sunshine State for a reason.

As well as being home to the “happiest place on Earth” (Walt Disney World), there are also some great universities. The highest ranked, the University of Miami, is a private research university and notable alumni include Dwayne “The Rock” Johnson, Sylvester Stallone and Gloria Estefan.

The presence of the Kennedy Space Centre is reflected in the high concentration of local technology and aerospace institutions, including the Embry-Riddle Aeronautical University in Daytona Beach and the Florida Institute of Technology.

Georgia is home to Emory University, a renowned liberal arts college that counts His Holiness the XIV Dalai Lama as a member of its faculty.

Other institutions include the historically black university Spelman College, which hit the headlines when Beyoncé named the institution one of the four that would receive a Formation scholarship in 2017.

Or you could choose the University of Georgia, the state’s flagship research university and the oldest state-chartered university.

As well as a strong selection of higher education institutions, Georgia is also the birthplace of Coca-Cola and is the country’s number one producer of peanuts, pecans and peaches.

History lovers will be keen to explore the many museums and historical sites in the state of Maryland.

One of the biggest and highest-ranking universities is Johns Hopkins University. The institution has four campuses in Baltimore, and more than 16,000 students.

Another large institution in Maryland is the University of Maryland system, a public research university and the largest university in the Washington Metropolitan area. Given the university’s close proximity to the country's capital, there are a number of research partnerships with the federal government.

However, if you prefer a smaller institution you could try private liberal arts colleges McDaniel College or Stevenson University.

Among the attractions of North Carolina are the Appalachian Mountains, and the Blue Ridge Parkway and the Great Smoky Mountains National Park, two of the most most visited national parks in the US.

Duke University is one of the wealthiest private universities in the US and a top producer of international scholars. Duke University thrives in both the arts and sports, competing in athletics and basketball and hosting more than 60 art events a year.

Known as the Palmetto State, South Carolina is another option for nature lovers, as it is full of national parks, forests and water sports.

Eight colleges based in South Carolina feature in the 2022 US College Rankings. The top-ranked college in the state is Furman University, which has also been recognised as one of the most beautiful in the country.

Other universities in the state include the flagship University of South Carolina and Clemson University, which has a proud military tradition.

Considered an acquired taste, oysters are one of Virginia’s most famous offerings, and there are many festivals celebrating the seafood.

Not many universities can claim one of the principal authors of the Declaration of Independence as their founder. But the University of Virginia can, having been founded by Thomas Jefferson in 1819. The institution also has an impressive list of alumni including author Edgar Allen Poe, actor and writer Tina Fey, astronaut Karl Gordon Heinze and Olympian Wyatt Allen.

That’s not all the state has to offer in terms of higher education, as there are 21 universities in total that feature in the US College Rankings.

These include liberal arts college University of Richmond, military college Virginia Military Institute and Roanoke College, which has a long history of supporting international students.

The state of West Virginia is known for its rolling hills and for a wide range of outdoor recreational activities such as skiing, white water rafting, fishing, hiking and rock climbing.

College football is extremely popular in Alabama, with hundreds of thousands of fans turning out to watch the games.

Alabama’s top-ranking university, Samford University, is among the 100 oldest institutions in the United States, founded in 1841. It started as a male-only college but it gradually became coeducational with the first woman graduating from the institution in 1896.

The state’s flagship institution, the University of Alabama, is spread over four campuses in Birmingham, Huntsville, Tuscaloosa and Montgomery. The university provides more than 200 degrees and is renowned for its law school.

Kentucky’s most famous export is of course Kentucky Fried Chicken, but there is much more to the state than fast food.

There are a number of strong liberal arts colleges such as Centre College and Berea College, the latter of which offers students free tuition in exchange for working 10 hours a week at the university.

The University of Kentucky is the largest in the state, with 16 colleges and a graduate school. The number of international students at the institution is growing rapidly, with students from around 120 countries represented.

Mississippi is perhaps best known for being significant in the development of blues music, as well as for its world-famous river.

The University of Mississippi, often called Ole Miss, is a public research university with campuses in Oxford, Tupelo, Booneville, Grenada and Southaven. There are a number of student-run media outlets at the university including The Daily Mississippian, its online counterpart TheDMonline, The Ole Miss student yearbook and a radio station and live newscast.

Other institutions in the state include William Carey University, a Christian university based in Hattiesburg and Biloxi, and Mississippi State University, which was initially built as an agricultural university.

You can’t really speak about Tennessee without mentioning its thriving music scene that includes rock and roll, blues, country and rockabilly. It is considered the birthplace of blues and country, and artists such as Elvis Presley, Johnny Cash and Taylor Swift started their careers there.

Vanderbilt University, the state’s highest-ranking university, is located in Nashville within walking distance of the vibrant downtown area.

Other universities in the state that are worth exploring are liberal arts college Rhodes College, research-intensive institution the University of Tennessee, Knoxville and Lincoln Memorial University which is named after 16th US president Abraham Lincoln.

Sport, particularly college football, is integral to the lives of the people in Arkansas.

Five universities from the state of Arkansas feature in the 2022 US College Rankings, with a mixture of liberal arts, Christian and public universities.

Hendrix College is a liberal arts college associated with the Methodist Church. The university is home to students from nearly 30 countries studying 30 undergraduate majors and 40 minors. Students are also able to combine courses to create their own programmes.

Louisiana is a melting pot of cultures, with influences from France, Spain, Africa and Native American culture on the music, food and literature.

Tulane University, located in the capital of New Orleans, is a high-research university that started as a medical college. It has since expanded to 10 schools offering degrees in architecture, business, law, science, engineering and social work.

Xavier University is the nation's only historically black and Catholic institution. The university is renowned for its science programmes. It is the nation’s top producer of African American graduates who go on to receive life sciences PhDs, and is number one in the country for awarding African Americans undergraduate degrees in physics and the physical sciences.

Oklahoma is rich in Native American history, which is showcased in its many museums and heritage centres.

The University of Tulsa, Oklahoma’s highest-ranking university, has been around since before Oklahoma was declared a state. It is a leading private research institution, with a focus on liberal arts, sciences and engineering disciplines.

Like many older institutions, the university has its own unique traditions, including bell ringing when students complete their final exam, and a homecoming bonfire.

Texas is the second-largest state in the US by area and population. The state has made a strong mark on popular culture with its association with cowboys in Western films and country music.

Its top-ranking institution, Rice University, focuses on undergraduates and has a reputation for unconventional thinking. The university has a tradition of elaborate jokes, the most famous being in 1988 when three engineers, three scientists and an English major developed a successful plan to rotate the university’s 2,000-pound statue of William Marsh Rice by 180 degrees.

There are an impressive 34 ranked universities in the state, so there is a huge choice of institutions if you have your heart set on heading to Texas.

Other options are the state flagship Texas A&M University; the oldest university in the region, Baylor University; and Catholic liberal arts college University of Dallas. 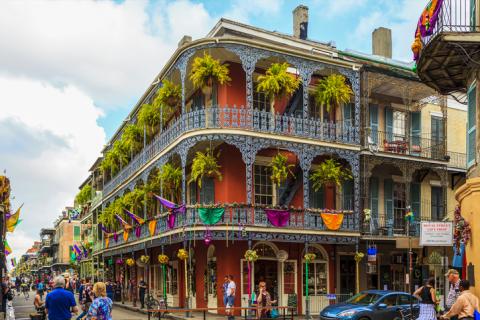