Seattle is an American metropolis in the northwestern state of Washington, constructed as a port town on the Atlantic Ocean. Education is an integral part of the city, with eight higher learning institutions and more than half of the population has a college degree.

Seattle is also hailed as the birthplace of many big corporations including Microsoft, Starbucks, and Amazon.

Below are the best universities to study at in Seattle according to the Wall Street Journal/Times Higher Education US College Rankings 2022.

Founded in 1861, the University of Washington Seattle is a public research university and the largest site in an academic complex that also includes campuses in Bothell and Tacoma.

In total there are 10 academic schools and five colleges, focusing on liberal arts, pre-professional programmes, and research. Founded in 1919, the school of aquatic and fishery sciences at the university is one of the oldest departments of its kind in the United States.

There are also 10 distinct artistic centres at the university. The Burke Museum has research and collections in the fields of biology, palaeontology and geology, and the school of drama produces theatrical performances open to the student body and local public.

American football games are played at Husky Stadium, which can seat over 70,000 spectators and is recognised as one of the loudest arenas in the United States.

Seattle University is a Jesuit institution based in the Capitol Hill region of the city, and was established in 1891, the same year as Seattle Pacific University.

As well as the liberal arts, the university offers courses in pre-professional studies, theology, and law. The humanities department is known as the Matteo Ricci College, and offers a Jesuit-led education with an interdisciplinary focus.

Athletics teams are known as the Redhawks and have competed in the NCAA Division I since 2009. The Eisiminger Fitness Centre is open to all students, is 180,000² ft and contains both cardio and weight facilities.

A major event in the university calendar is Quadstock, a music festival featuring indie music and other live events, taking place on Union Green and the Quad area of campus for which it is named.

Founded in 1891, Seattle Pacific University is a liberal arts institution affiliated with the Free Methodist Church. The primary 43 acre campus is located in Fremont, four miles from the downtown area.

As well as its college of arts and sciences, the university has departments in health sciences, economics, psychology, education and theology. In total there are 65 majors and 57 minors. The average class size is 22, although almost half of all classes will have less than 20 students. Four doctorate programmes are offered at the graduate school.

The central academic administration building is Demaray Hall, which can be identified by its clock tower, a symbol of the university. The oldest building on campus is Alexander Hall, which houses the theology department. Ames Library is the primary study facility on campus, and contains 250,000 print volumes, and hosts a weekly symposium known as Creative Conversations.

The university also has a wilderness field station in the San Juan Islands, and Camp Casey, a camping retreat and conference centre.

Click each institution to view its World University Rankings profile. 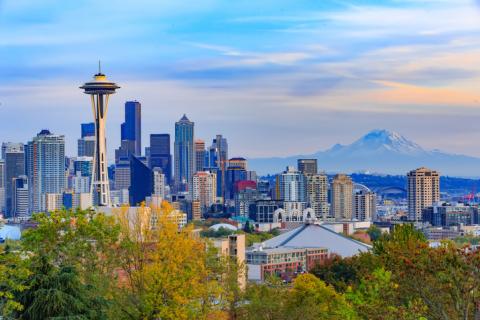