Best universities in the Midwest of the United States 2022

The Midwest of the United States is a large chunk in the centre of the country consisting of 12 states.

Each state has its own unique identity. Some of the states form part of the Great Lakes region, which includes Lake Michigan, the only lake located entirely within the US.

The largest city in the Midwest is Chicago, a hub of industry and innovation. However, other states such as Michigan and Ohio are known for their sweeping landscapes.

The area is also known for its vibrant music scene including jazz, bluegrass, rock ’n’ roll, blues and funk.

So before you choose which institution you want to study at, check out the best universities in the Midwest based on data collected for the Times Higher Education US College Rankings .

Home to the “Windy City” – Chicago – Illinois is a state of great industry and agricultural productivity. The Port of Chicago is connected to a number of other global ports and Chicago’s O’Hare International airport is considered one of the busiest in the world.

One of the highest ranked universities is Northwestern University, which counts Meghan Markle, the Duchess of Sussex among its alumni, as well as 19 Nobel laureates, 38 Pulitzer prizewinners and 16 Rhodes Scholars.

The University of Chicago is one of the top universities in the state as well as the country. It ranks particularly highly for the arts and humanities, physical sciences, law and psychology.

It’s also worth checking out the different campuses of the University of Illinois System, which has campuses in Chicago, Springfield and Urbana-Champaign.

Indiana’s top university, the University of Notre Dame, was established with the aim of being one of America’s great Catholic universities. Although it remains true to its religious roots it is now “dedicated to religious belief no less than scientific fact” and stands for “values in a world of facts”.

Other universities in the state of Indiana include the Purdue University system with campuses in West Lafayette, Hammond and Fort Wayne among others. It is well known for its engineering programme.

Other universities include Valparaiso University which was one of the first co-educational colleges in the United States and liberal arts college Earlham College.

The top university in Iowa is liberal arts college Grinnell College. The college has an innovative academic structure that allows students to choose their own classes with guidance from faculty members.

The University of Iowa is a national research university, home to the world-renowned Iowa Writers’ Workshop, which has produced 13 Pulitzer prizewinners. Unesco has since designated Iowa a City of Literature.

If those don’t take your fancy then there are 17 universities in total to choose from including Dordt University, Drake University and Iowa State University.

Kansas is known as the “the sunflower state”. The wild sunflower is its official flower and appears on the state flag.

With four universities in Kansas in total, the University of Kansas is the largest and highest ranked institution. With five campuses spanning the state, the university’s areas of expertise include aerospace, civil and petroleum engineering, rural medicine, nursing and occupational therapy.

Michigan is part of the Great Lakes region of the US and sits on the banks of Lake Michigan, the only lake to be located entirely in the United States. It is well known for its scenic landscapes and outdoor pursuits so would be ideal for a student who loves the outdoors.

As far as higher education institutions go, you will find plenty of great universities in Michigan.

From the University of Michigan, one of the largest research universities in the US, to specialist university Michigan Technological University and liberal arts college Albion College, there are 27 universities to choose from.

Minnesota is home to a large number of lakes, making it the “Land of the 10,000 Lakes”. The state has 72 state parks and recreation areas and 58 state forests.

Among all this natural beauty are 23 universities for students to choose from.

The highest ranked is Carleton College a small, private, liberal arts college in the historic river town of Northfield.

Or if you prefer a larger institution, then there is the University of Minnesota system which has several campuses across the state and more than 50,000 students enrolled.

Missouri is a state that blends culture from the south of the country with that from the Midwest. The musical styles of ragtime, Kansas City jazz and St. Louis blues were developed in Missouri and the music scene is still prominent today. It is also a major centre for beer brewing.

One of the top universities, Washington University in St Louis, has been affiliated with 24 Nobel Laureates while Saint Louis University awarded the first ever PhD in aviation in 2013, and sports forms a big part of its student life.

Altogether, there are 18 universities to choose from.

Sports is a big deal in the state of Nebraska, especially university baseball. The College World Series, one of the biggest college baseball events, takes place in the city of Omaha every year.

Omaha is also home to one of the best zoos in the world, the Henry Doorly Zoo and Aquarium.

Universities in Nebraska are just as high-quality, with Creighton University, a Jesuit Catholic university; Doane University, a private liberal arts college, and the University of Nebraska-Lincoln, which is a great institution for international students.

North Dakota is one of the most sparsely-populated states in the US.

It also has just two ranked universities. The University of North Dakota is the oldest and largest university in the state.

The other university you could choose to attend is North Dakota State University.

The state of Ohio takes its name from the Ohio River, which means “good river”, “great river” or large creek”.

Case Western Reserve University is a private research university in the largest city in Ohio – Cleveland. It is classified by the Carnegie Foundation as a university with very high research activity.

Ohio State University was originally established as an agricultural and mechanical college that also offered a broad curriculum in English and ancient foreign languages – and still does so today.

The state of South Dakota is split in two by the Missouri River. The two halves are very different and are known as “West River” and “East River”.

South Dakota is home to three ranked universities for students to choose from. The University of South Dakota is the oldest institution in the state, while Augustana University is a private, liberal arts college.

Wisconsin is known as “America’s Dairyland” because it is one of the leading producers of dairy in the States, known particularly for its cheese.

The University of Wisconsin System is one of the largest public higher education systems in the country. It enrols more than 174,000 students each year and has 13 campuses.

If that doesn’t take your fancy, then there are a number of other institutions to choose from such as Catholic institution Marquette University, liberal arts college and music conservatory Lawrence University, engineering institution Milwaukee School of Engineering and Beloit College, the oldest college in Wisconsin. 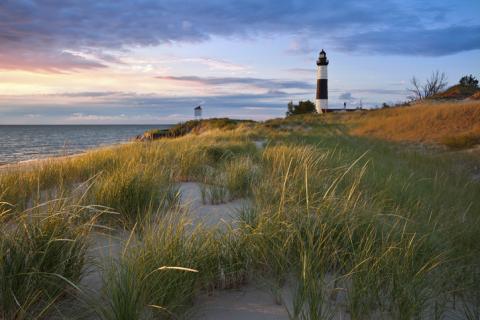