Massachusetts offers a rich array of things to do and has a significant and unique place in American history and culture, and continues to contribute to its varied culture.

Massachusetts is well known for being a hub of biotechnology, engineering, higher education, finance, and maritime trade. While Boston is a hub for students there are many great things to explore in scenic Cape Cod or nearby Nantucket.

Many students opt for Massachusetts as it is considered to be a more welcoming and more moderately-paced site than New York City without compensating on cultural richness, diversity, and stimuli that the Big Apple has.

Not only is Massachusetts home to the oldest elementary and high schools in the country, it is home to the oldest and arguably most prestigious college in the country, Harvard University. Both Harvard University and the neighbouring university of Massachusetts Institute of Technology consistently rank among the world’s best universities year after year.

These are the best universities in Massachusetts based on the Wall Street Journal/Times Higher Education US College Rankings 2022.

With roots dating back to 1636, it is known as the oldest university in the US, and its main campus is located in the city of Cambridge. The university itself is organised into 11 separate academic units spread throughout the area. It is the only Ivy League university in the state.

Uniquely it has more than 18 million volumes in its university library – a number beaten only by the Library of Congress and the Boston Public Library.

Massachusetts Institute of Technology (MIT) has consistently been one of the highest ranked universities in the world. Often mistaken for being in Boston, the university is located on 168 acres of land in the city of Cambridge. As the name suggests, MIT is strongly focused on science and technology, and is considered a dominant world-leader in these fields.

Amherst College is a private liberal arts college in Amherst, Massachusetts. It is an exclusively undergraduate university where students can choose from 38 major programmes in an open curriculum.

It is thought to be one of the most selective liberal arts colleges in the US.

The university has been recognised for its commitment to quality teaching and student interaction. The student-faculty ratio is 8:1 and 90 per cent of classes have fewer than 30 students.

Williams College is a private liberal arts college, this time in Williamstown in Massachusetts.

The college has produced many prominent alumni including eight Pulitzer prize winners, a Nobel Prize Laureate, 10 billionaires, and 71 members of the United States Congress.

Founded in 1852, Tufts University is a private research university based in Medford, Massachusetts, with two additional US campuses in the cities of Boston and Grafton – also in Massachusetts – and another in Taillores, France.

The Medford campus houses some of the university’s oldest buildings. It features the schools of arts and sciences, the school of engineering, the Fletcher School of Law and Diplomacy, and the Jonathan M. Tisch College of Citizenship and Public Service.

The Boston campus is mainly centred in the Chinatown district. It is home to the schools of medicine, dental medicine, graduate biomedical sciences, nutrition science and policy, and the human nutrition research centre on ageing.

Located in the city centre, Boston University, is ranked highly across the world. Offering 250 different fields of study across 17 schools, the university is renowned for its groundbreaking research. Students have the chance to study across two campuses, including one based in the historic south end of Boston and the Boston University Medical Campus.

Brandeis University was founded just 70 years ago and is great for students looking for a modern institution; and Boston College has a suburban campus with regular transport into the city centre.

However, for students looking to live outside of Boston, there are plenty of other cities in Massachusetts, which all have their own personalities. For instance, Worcester, Massachusetts’ second-largest city, is just an hours drive from Boston and universities there include Assumption College, and Worcester State University.

Students looking to be immersed within nature, art and culture can head to Springfield – midway between New York and Boston. Universities located there include: Springfield College and Western New England University.

Click each institution to view its World University Rankings profile. 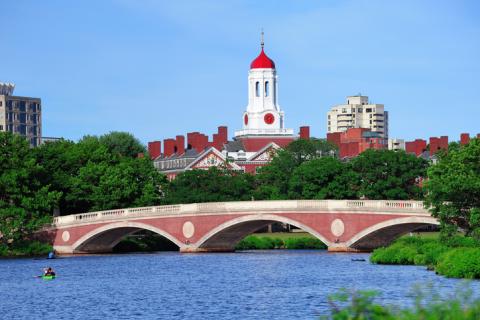