Top 10 public universities in the US

When many people think of the best universities in the US, the Ivy League – a group of eight highly ranked private universities –  comes to mind.

Every US state is required to have at least one public university, although some of the larger states may have many public universities. Such institutions will often offer discounted tuition fees for students who are residents of the state.

Based on data collected by the Wall Street Journal/Times Higher Education US College Rankings, we’ve put together a list of the top 100 public universities in the US.

The WSJ/THE US College Rankings is a more student-centred ranking because of its emphasis on student outcomes and engagement. While previously we have used results from the US Student Survey for the ranking, we were unable to conduct a survey in 2021 because of the coronavirus pandemic. Instead, we have used data from the 2019 survey to inform this year’s ranking. The full methodology can be found here.

Top 5 public universities in the US

The university is well known for its commitment to sustainability; one goal is that 25 per cent of food service spending by campus will be on sustainable food products by 2030. An on-campus “biodigester”, which was invented at the university, can turn 50 tonnes of waste into energy for the campus every day.

The university is split into 14 colleges and schools that include chemistry, engineering, business, natural resources and optometry.

Students can participate in more than 550 student organisations, and the student-run newspaper, The Daily Tar Heel, has won national awards for collegiate media.

The university is affiliated with 15 Nobel laureates, 15 MacArthur fellows and 118 National Collegiate Athletic Association titles, while 270 Olympic medals have been won by alumni or students. Additionally, more than 140 companies have been created based on technology developed at UCLA.

-The University of Michigan-Ann Arbor was founded in 1817 with just seven students taught by two professors. By 1866, there were 1,205 students, and the first women were admitted to the university in 1870.
-The university was also the first in the US to hold seminars as a method of study.

Student-run newspaper The Michigan Daily was founded in 1890 and is published five days a week during the academic year.

Other student publications include The Michigan Review and The Michigan Independent. Students also run the humour publications Gargoyle and The Every Three Weekly. Several academic journals are also published at the institution.

Eight of the weirdest US college mascots
Brits in America: how easy is it to move to the US?
A day at a US graduation ceremony: what to expect
University of Nebraska Medical Center: learning in the lab and on the ward
UC Berkeley: self-motivating, thought-provoking and interactive
Fighting food waste and inequality as a student in the US

Top 100 public universities in the US 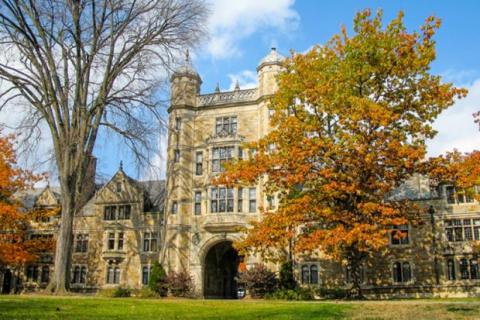