International perspective: a Chinese student in the Netherlands

I grew up wanting to explore the world. I knew that if I travelled, I would meet people with different cultures and languages. I would see what connects us all as human beings.

As an anthropology student, I believe our values and beliefs are best developed by seeing the world and experiencing new things. This attitude led me to travel out of China and into Europe.

International education focuses on the application and practice of knowledge, the development of critical thinking and the enhancement of soft skills, which is what I wanted.

I was initially attracted to The Netherlands because its tuition fees were much cheaper compared with the United States. In addition, the anthropology major I wanted to study was ranked in the top 20 programmes internationally.

I wanted to experience studying abroad like an anthropologist going to a remote island to do fieldwork. I am very grateful that I chose the University of Amsterdam because it fully met my expectations, and even exceeded them. It enabled me to do my project on the destigmatisation of sex toys in my first year of study. It’s a sensitive and little-explored topic in the academic world, but the university supported me.

I think the diversity and inclusiveness of the University of Amsterdam make it unique. I don’t feel like a stranger in Amsterdam. I have been in the country for almost a year now and it has become my second home. Although Shanghai is also a cosmopolitan city, I noticed foreigners when I lived there. But as a foreigner in Amsterdam, my presence seems natural, and the city embraces everyone who lives here. A simple “good day” from a stranger makes me feel welcome.

What makes Dutch culture distinctly different from Asian culture is individualism. Here in the Netherlands, each person is an independent individual, living for themselves. The will of the individual is respected, and unique ideas are valuable. I can do what I really like here without caring what others think.

When I spoke to my classmates, I found that many of them did not go to college directly after high school but chose to take a gap year; some even took several gap years. They said to me that they hadn’t found the thing they wanted to study yet, so why should they rush to school?

There were many people who switched to anthropology after studying other majors. At this point, I felt the differences and the similarities that brought us all together: the similarity was that we were all looking for a purpose in life; the difference was that there is less emphasis on age, employment and marriage in the Netherlands. These pressures would be things that could stop someone exploring their options in China.

Therefore, I would recommend studying in Europe, not only because of the high quality of education but for the opportunity to be encouraged to be the kind of person you want to be. 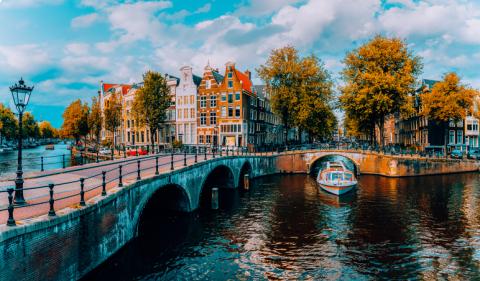 Siyang Dai is an international student from Shanghai, China studying cultural anthropology and development sociology at the University of Amsterdam. Siyang wanted her studies to reflect actual fieldwork in anthropology so she decided to study abroad to experience a new culture