What does it mean to be a feminist? That was the central question posed at the Harvard Women’s Leadership Conference last month. Founded in 1988, the annual conference invites female professionals to address female students at the university.

The conference aims to create a community of women devoted to personal and professional development through interactive workshops, discussions and panels on issues such as self-awareness, health and well-being, and leadership development.

This year, Teresa Younger, the president and CEO of the Ms. Foundation for Women, was the keynote speaker. She explained how feminism was the social, economic and political equality of all genders. As head of the oldest women’s foundation in the US, Teresa is vocal about the problems facing women across all professions, especially academia. I had the pleasure of hearing her speak, and receiving an invite to her office if I ever visited New York.

Catch up on Raphaëlle's  journey here

Within leadership and academia, women are vastly underrepresented and subjected to casual sexism. Harvard is not perfect – one has only to look at the heavily skewed male-to-female faculty ratio – but it has made significant steps in recent years, with a 13 per cent increase in female faculty members since 2008.

It would be unfair to say that sexism was prevalent at Harvard; the institution itself does an amazing job of fostering equality, tolerance and respect. There are numerous sexual assault clinics and advice facilities, as well as disciplinary boards and executive staff for students. However, it is the small comments here and there that the university struggles to directly address.

As the #MeToo campaign increases in size and strength, I have become increasingly aware of my abilities, as well as vulnerabilities, as a woman studying here. My first, and unfortunately not my last, experience with sexism at Harvard occurred after I had secured a highly competitive research job. When I mentioned it to a fellow classmate, his first question was, “was the interviewer male?” Bewildered, I answered, “yes, but why does that matter?” He gave me half a smile and said, “that explains it then”. In that moment, I felt that my academic ability was discredited and my achievement undermined.

It was largely this upsetting experience that encouraged me to attend the Women’s Leadership Conference to build up my confidence and establish a support network. We learned how to embrace our strengths and address our weaknesses, not only on an academic and emotional level, but physically too. At the conference, I was taught self-defence techniques by police officers from the Harvard University Police Department (HUPD). I hope to never be in a situation where I have to use them, but should the occasion arise, I can now deal with it.

Cambridge, as a town, appears safe. Police cars patrol the area, security personnel are on almost every corner, and there are blue police phone booths dotted around campus. But like any town, robberies and attack attempts are frequently reported to local police and, unfortunately, women are often seen as easy targets.

Recently, a female student was assaulted as she ran by the river at night. She was fortunate enough to escape using her pepper spray. This event in particular shook me as I had run past the exact same spot, on the exact same day, one hour later than she had, and without pepper spray. It made me realise that I should take greater care and not consider myself invincible. This is why the self-defence course taught by the HUPD was so important.

University is not just about learning and pushing through the endless flow of exams and homework; it’s about survival as well. Understanding how to operate within the world as a young female, without a parent’s protection, is a valuable lesson higher education can teach.

Through the Women’s Leadership Conference, and my personal experiences with sexism, I am increasingly aware of the role that other women can play to motivate and support my career and personal ambitions.

After all, I may be in the company of powerful men at Harvard, but I am in the presence of even stronger women. 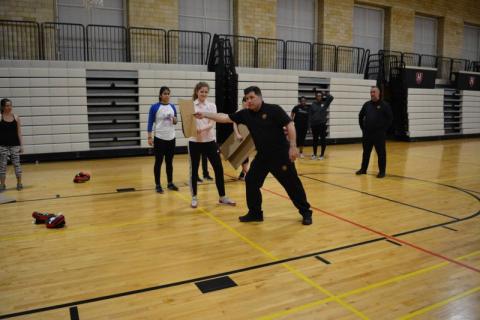 Casual sexist comments and on-campus assaults are just two of the things bringing down Harvard’s commitment to gender equality, writes Raphaëlle this month