Best universities in the US for computer science degrees 2022

Top universities in the US for computer science degrees 2022

Not only are the world’s biggest tech companies­ such as Google, Facebook, Microsoft and Apple headquartered in the US, it’s also home to some of the best universities in the world for computer science degrees.

Many computing courses in the US focus on developing the practical skills and real-world experience that students need to enter the technology industry.

There are 128 US universities in the THE Computer Science Rankings 2022. These are spread across the country from California to New York and include a number of specialist technology colleges.

Below are the best universities in US for computer science degrees.

The department of electrical engineering and computer sciences at the University of California, Berkeley was established in the late 1960s.

Because engineers and computer scientists often work in teams, all students on these courses are encouraged to take courses in communication.

Postgraduates can choose from research-oriented or industry-oriented programmes that will prepare them to continue with research-related work or to enter the job market.

Faculty and alumni from the department have founded nearly 900 companies. Former students include Steve Wozniak, who co-founded Apple alongside Steve Jobs.

Dating back to 1636, Harvard University is the oldest university in the US. It’s a member of the Ivy League and regarded as one of the most prestigious institutions in the world.

Courses at Harvard are designed to be flexible. Computer science students can combine their studies with other fields, including mathematics, physics, economics, psychology, and linguistics. The introduction to computer science class at Harvard is among the university’s most popular courses.

The computer science concentration covers topics ranging from cryptography to sensor motes. Students also have the opportunity to meet influential thought leaders in the field and use the latest tools and technologies, such as grid computing.

A range of clubs and societies fall under the computer science and technology umbrella, including the Harvard Undergraduate Robotics Club and Harvard Video Game Development Club.

Harvard alumni include Bill Gates, founder of Microsoft; and Mark Zuckerberg, who famously invented Facebook while still a student at the university.

Undergraduates can undertake research projects in areas such as robotics and human-computer interaction. In the spring, students get to present the results of their work at the university-wide “Meeting of the Minds” celebration of undergraduate research.

There are also a wide range of master’s programmes, many of them being some of the first in the world to be offered. These include the master’s in automated science and master’s in computer vision.

The university conducts research in areas including brain science and driverless cars. It was also the first institution, via professor Scott Fahlman in 1982, to create a “smile” in an email.

The Massachusetts Institute of Technology (MIT) is an independent, co-educational, private research university based in the city of Cambridge, Massachusetts.

The undergraduate computer science programme includes compulsory units in programming, software construction and AI, as well as electives in areas such as database systems, language engineering and micro-computing.

There is no master’s degree in computer science at the university, but there is a doctoral programme.

Technological advances accredited to MIT include radar and the invention of magnetic core memory, which enabled the development of digital computers.

MIT computer science graduates have gone on to found some of the most influential tech companies. These include Robert Metcalfe, co-inventor of Ethernet; and Drew Houston, co-founder of Dropbox.

Stanford University’s computer science department was established in 1965 and offers a range of bachelor’s, master’s and doctoral degrees.

Stanford’s undergraduate computer science programme covers areas such as programming, AI, biocomputation, computer engineering and graphics. All students take the same six courses in the first year. In the latter half of their degree they can choose one area to focus on.

Postgraduates are able to “shop around” for a two-week period and try as many different classes as they like, then decide which courses they want to continue with. Computer science students can take courses in areas including software theory, theoretical computer science and computer and network security.

Given the institution’s focus on innovation, it is no surprise that Stanford graduates are famous for their entrepreneurship. Alumni include the founders of Google, Netflix, WhatsApp, Instagram and Palantir Technologies. In fact, companies founded by Stanford affiliates generate more than $2.7 trillion annual revenue, which would equate to the 10th largest economy in the world.

Top universities in the US for computer science degrees 2022 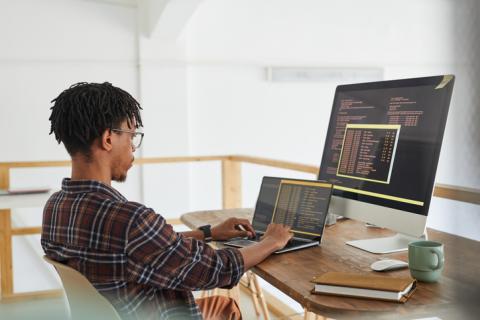