Pennsylvania is nicknamed the Keystone State for its close proximity to many other regions. The state borders Lake Erie and Canada to the north, and the Mason-Dixon Line to the south which marks the start of the country’s southern region. It also borders New York in the east and Ohio and West Virginia in the west.

Students can enjoy the Curtis Institute of Music, the Academy of Music and the Philadelphia Orchestra’s Kimmel Center. The Walnut Street Theatre has been operating since 1809 and is the oldest in the English-speaking world.

The University of Pennsylvania (Penn, or UPenn) is a private Ivy League research university in Philadelphia. Its founding date is estimated to be 1740, and the institution is one of the nine colonial colleges chartered prior to the US Declaration of Independence. Benjamin Franklin, Penn’s founder and first president, advocated an educational programme that trained leaders in commerce, government and public service, similar to a modern liberal arts curriculum.

UPenn has now expanded into a 302-acre campus with 200 buildings. It has many notable “first” landmarks on campus, including the country’s first students’ union, double-decker college football stadium, and the world’s first collegiate business school – the Wharton School.

Carnegie Mellon University (CMU) was established in Pittsburgh by the industrialist Andrew Carnegie. It began as the Carnegie Technical Schools and then became the Carnegie Institute of Technology in 1912. In 1967, it merged with the Mellon Institute of Industrial Research, resulting in its present incarnation.

As well as its US locations in Pittsburgh and Silicon Valley, Carnegie Mellon has a campus in Doha, Qatar, and offers degree programmes in Africa, Asia, Australia, Europe and Latin America.

CMU has many student traditions with a distinctly Scottish flavour that owe their heritage to its Scottish-American founder, Andrew Carnegie. They include celebratory bagpipe playing on campus and the kilt-wearing student marching band known as the “Band without Pants”.

Swarthmore College was founded in 1864 by members of the Religious Society of Friends (Quakers). The college is named after Swarthmoor Hall, a 17th-century Elizabethan manor house in England that served as the centre of the Quaker movement in the 1650s.

The private liberal arts school was the first co-educational college in the US.

Swarthmore offers more than 40 courses of study, and provides the opportunity for students to design their own major. More than 600 courses are offered on campus each year. With a student-faculty ratio of 8:1, Swarthmore develops a personal learning environment.

Some students may choose to pursue their degree through Swarthmore’s Honors Program, which emphasises independent learning in small seminar classes and is assessed through oral and written tests given by external examiners who are experts in their field.

The 425-acre campus is located in Swarthmore, which is 11 miles (17km) southwest of Philadelphia.

The college has a range of unusual traditions, from the annual screening of The Graduate on Parrish Beach before autumn classes begin, to the Crum Regatta (for which students make their own flotation devices), to the McCabe Mile, a one-mile (1.6km) race in the library, for which the winning trophy is a roll of toilet paper.

Founded in 1833 by local Quakers who aimed to provide a Quaker education to the young men of the area, Haverford College still adheres to the Christian movement’s ideals of peace, integrity, community and equality. The institution is no longer directly affiliated to the church, and the college became co-educational in the 1970s.

Known for its picturesque campus, it stretches over 200 acres, with woodland and lawns interspersed by the college’s 50 or so main academic, administrative and residential buildings. The campus has gardens as well as its own arboretum with 400 species of trees.

There are extensive sports fields as well as a gymnasium and a swimming pool. Haverford also has its own observatory, music centre, libraries, fine arts centre and dining halls. Some 98 per cent of students live on campus.

Haverford is home to several specialist research centres, including the Center for Peace and Global Citizenship, the Hurford Center for the Arts and Humanities, and the Koshland Integrated Natural Sciences Center.

Haverford College is also known for its governance by an honour code, which is written and governed solely by students. It is an important example of the ways in which students determine the course of their Haverford experience. Students also serve on hiring committees, manage budgets, and run more than 140 clubs and organisations.

Lehigh University was founded in 1865 by the businessman and railroad pioneer Asa Packer, and the private research university is located in Bethlehem, Pennsylvania.

Sitting within 2,300 acres of picturesque woodland, it’s one of the largest private university campuses in the country. It’s situated 100 miles (160km) from both Philadelphia and New York City, with three separate sites on and around South Mountain: the main Asa Packer campus, the Mountaintop campus and the Murray H. Goodman campus, where most of its athletic facilities, including a 16,000-seat stadium, can be found.

There are four distinct colleges: arts and sciences, business and economics, education, and the P. C. Rossin College of Engineering and Applied Science.

Lehigh takes an entrepreneurial and interdisciplinary approach to learning. With nearly 2,000 employees, it is the largest employer in Bethlehem and receives roughly $74 million a year in grants and scholarships.

Lehigh was only the sixth university in the world to receive NGO status from the United Nations’ Office of Public Information. The university works with the UN through what is called its United National Partnership, offering 56 UN-related programmes each year.

There are an additional 250 study-abroad programmes for students to choose from, with links to 80 countries worldwide. 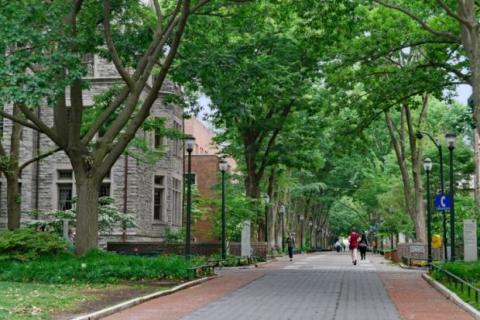