New Zealand is a Pacific island nation of about 5 million people. While New Zealand has a history of colonialism, its distinct culture has also been strongly influenced by the native Maori people of the island.

New Zealand is a member of the Commonwealth, and its lasting ties with the United Kingdom are evidenced by English as the first language of the nation, and the standard language for its universities.

The temperate climate of New Zealand has allowed its agricultural sector to flourish over the centuries, and there are actually six times more sheep than people in the nation. There also some great cities in New Zealand, including Auckland, Christchurch and Wellington.

Famous faces from New Zealand include pop singer Lorde and actor Karl Urban. The country is well known as the filming location of the Lord of the Rings movies, and is also the basis for much of the material from New Zealand musical comedy duo Flight of the Conchords.

Below are some of the best universities to study at in New Zealand based on the Times Higher Education World University Rankings 2022.

The top 3 universities in New Zealand

- Founded in 1869 on the south-east coast of the South Island, the University of Otago is the oldest university in New Zealand.
- Medical researcher Muriel Bell, mountaineer Christine Jensen Burke and astrophysicist Mazlan Othman all graduated from Otago.

The University of Otago’s expansive grounds and sumptuous Scottish-influenced architecture give it a deserved reputation as one of the most beautiful campuses.

A research-led atmosphere is fostered at the University of Otago, and the university is known to excel in the field of health sciences, with undergraduate and doctoral programmes offered in the field. Outside the student town of Dunedin, Otago has health science institutes in Christchurch and Wellington.

International students are welcomed, with exchange partnerships established with more than 90 university campuses globally. Otago has also awarded Rhodes Scholarships to a select group of New Zealander graduates since 1904.

- Auckland University of Technology was founded on 1 January 2000, when a former technical college was granted university status.
- The university has three campuses, with its City campus being the largest in central Auckland.

The two other campuses, South and North, are accessible via shuttle bus.

The students’ association at the university produces a fortnightly student magazine called Debate. It is put together by a full-time editor and a team of student contributors. It features news, views, cartoons, feature articles and columns.

The Auckland badge of arms is topped by three kiwis, the flightless bird that is the national animal of New Zealand.

Since 2016, Auckland has required that students obtain an Academic English Language Requirement before they can take undergraduate courses.

Chairman of HSBC Vincent Cheng is an alumnus of Auckland, as is the 37th prime minister of New Zealand, Helen Clark, and Academy Award-winning screenwriter Philippa Boyens. 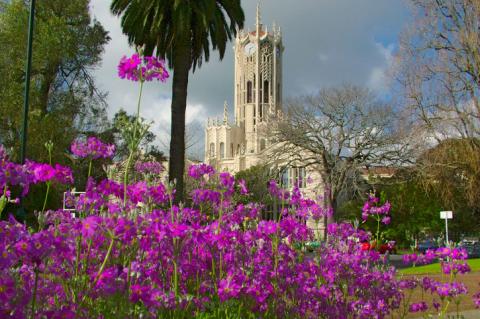