Scroll down for the full list of best universities in Australia

If you are looking to study in Australia, you will need to know which are the top universities in Australia.

There are 37 top universities in Australia, according to Times Higher Education’s World University Rankings 2023, and seven of them feature in the prestigious top 100, meaning there is no shortage of choice.

The best Australian universities are spread across the country, from Perth in the west to Brisbane in the east, Darwin in the north and Hobart in the south.

The best university in Australia, according to the THE rankings, is the University of Melbourne.

Australia has the third-highest number of international students in the world, behind only the UK and the US – pretty impressive for a nation of just 24 million people.

The Australian National University was established in 1946. It is located in Canberra, Australia’s capital city and seat of government.

The university was originally created as a postgraduate research university by the Parliament of Australia.

It counts six Nobel prizewinners among its faculty and alumni, and is even run by a Nobel laureate. Brian Schmidt – who won the 2011 Nobel Prize in Physics (with Saul Perlmutter and Adam Riess) for providing evidence that the expansion of the universe is accelerating – is the institution’s vice-chancellor.

Founded in 1851, the University of Sydney is the oldest university in Australia.

Approximately 46,000 students attend the University of Sydney, representing some 134 nations.

The are more than 280 overseas exchange programmes in place with more than 30 countries.

No fewer than five Australian prime ministers attended the university, including Edmund Barton who, in 1901, won Australia’s first ever federal election.

There are more than 90 research centres at the university undertaking globally recognised research in a range of areas.

3. The University of Queensland

The University of Queensland has about 40,000 students enrolled, including 12,000 international students from 141 countries.

It also has one of Australia’s largest PhD cohorts, with about 13,800 postgraduate students registered.

The university’s main campus is located in the green and leafy inner Brisbane suburb of St Lucia – one of the most affluent areas of the city. There are two other campuses as part of the university and 40 teaching and research sites.

About a third of the students come from overseas, from more than 142 countries.

Monash University was founded in 1958 and is the largest university in Australia.

The university was named after the engineer, military leader and public administrator Sir John Monash.

The university has many campuses across Victoria and Australia, as well as international campuses in Malaysia, Italy, India and China. It operates several libraries at all its campuses, housing more than 3.2 million items in total.

The University of Melbourne was founded in 1853, making it the second-oldest university in the country.

Nobel prizewinner Peter Doherty (physiology and medicine) and fellows of the Royal Society David Solomon and David Boger all teach or research at Melbourne.

More than 12,000 international students are enrolled at the University of Melbourne, and if you do get a place there, you will be joining students from 130 countries. 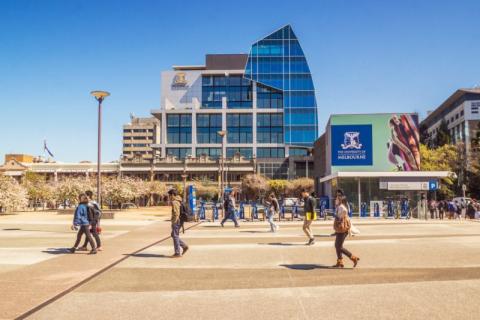