For students considering careers as a vet, a biotechnology researcher or a conservation expert undertaking a degree in the life sciences is a solid first step into any of these careers.

However, the skills you’ll pick up through such courses, such as problem-solving, data analysis and research are equally transferable to jobs that don’t require a lab coat. Non-science career paths include consultancy, teaching, political policy and law.

Home to beautiful natural surroundings and diverse cultural heritage, it’s no wonder Canada is a top destination for international students. The country’s universities are well represented in the Times Higher Education World University Rankings 2022 and tuition costs are often a little lower than similar destinations such as the US or UK.

Canadian institutions have a long history of nurturing scientific talent, from Kirsty Duncan, who sat on the Intergovernmental Panel on Climate Change that won the 2007 Nobel Peace Prize before becoming Canada’s first Minister of Science, to Sir Frederick Banting, co-discoverer of insulin and its potential to treat diabetes.

Many universities in Canada have a major and minor system where you can study life science disciplines alongside any other subject of your choosing, offering you breadth and flexibility as well as depth in your studies.

With a strong reputation in the sciences, the University of Toronto receives the most annual research funding of any Canadian institution in this field, making it a site for cutting-edge scientific discovery.

At the University of Toronto, you can choose a specialist programme, where one discipline makes up the majority of your studies; a double major in which you split your time between two disciplines; or one major and two minors, where you study one subject in depth and two subjects alongside.

All aspects of life sciences can be studied at undergraduate and postgraduate level within this system, from ecology and evolutionary biology to neurobiology, conservation, and animal physiology.

Field courses in locations such as the New World tropics, Algonquin Park and the university’s Koffler Scientific reserve are often taken alongside life science degrees.

The university is one of five Canadian institutions that came together to establish the Bamfield Marine Sciences Centre. Located on Vancouver Island, the centre provides year-round research facilities and technical assistance for biologists, ecologists and oceanographers, as well as offering placements to life science students.

Courses in the life sciences are overseen by the botany department, among the largest of its kind in North America, and the zoology department, which conducts research and teaching in developmental biology, comparative animal physiology, ecology and evolution.

Founded in 1821, McGill University is located on the slopes of Mount Royal in Montreal, with a second campus in Sainte-Anne-de-Bellevue, about 30km from the city centre.

McGill has taught more Nobel laureates (12) and Rhodes Scholars (147) than any other Canadian institution. The university also has the country’s largest endowment per student, meaning there is plenty of funding, support and scholarship opportunities.

McGill offers a major in life sciences (biological and agricultural), a cross-disciplinary programme with core courses covering animal, plant, cell and molecular biology as well as specialisations from pure biology to multidisciplinary and applied life sciences. Courses have small class sizes and a variety of laboratory and field-based projects as well as internship and research opportunities.

Montreal is Canada’s second biggest city and although its official language is French, classes at McGill are taught in English.

Established in 1908 in Edmonton, the capital of Alberta, the University of Alberta is a public research university located at the edge of the North Saskatchewan River valley.

Its South Campus focuses on agricultural research, while the more rural Augustana Campus provides a residential learning environment for liberal arts and sciences.

The university has produced one Nobel Laureate, four justices of the Supreme Court of Canada and 75 Rhodes Scholars. Over the years, alumni of the university have founded over 70,000 organisations throughout the world, one-third of which have a cultural, environmental or social mission or are non-profit.

The University of Alberta is also one of the five Canadian institutions that came together to establish the Bamfield Marine Sciences Centre on Vancouver Island.

As well as the Bachelor of Science general programme that allows students to specialise in a range of life science disciplines, the university also offers a number of joint degrees, including the BSc with a minor in business or education.

Courses are primarily taught in English, but many programmes are also offered in French through the Faculté Saint-Jean.

Founded in 1887, McMaster University is located in Hamilton, Ontario. Its historic main campus is situated on 121 hectares of land near Hamilton’s Royal Botanical Gardens.

The university is named after William McMaster, a prominent Canadian senator and banker who donated C$900,000 to found the institution.

The university places strong emphasis on research that targets the most urgent needs in society, particularly in the field of health sciences. This includes research from the Stem Cell and Cancer Research Institute, which has turned sections of human skin into blood cells to help alleviate the shortage of blood donors.

Science programmes at McMaster University are highly flexible, covering everything from earth sciences to biomedical engineering and chemical biology. The honours integrated science (iSci) programme is particularly innovative, blending content from across the science disciplines, while focusing on the foundations of chemistry, Earth science, life science, mathematics and physics.

Students and staff at McMaster University come from nearly 100 countries and the institution has established more than 70 international exchange agreements with leading universities around the world. 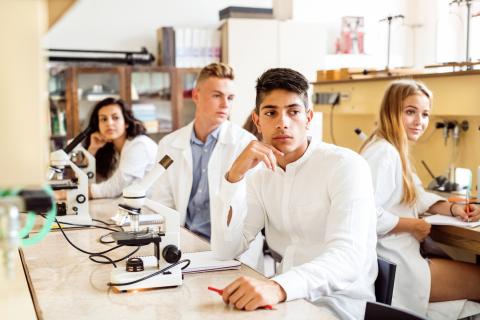