The demand for skilled computer scientists is only expected to rise across the globe as the fields of artificial intelligence, data science, cloud computing and analytics continue to develop.

Cities in Canada such as Toronto, Vancouver, Montreal and Waterloo are all now emerging as major tech hubs.

Canada is a popular study abroad choice, often with cheaper study options for international students compared with most anglophone countries. The country also has a reasonably simple application process and opportunities for permanent residency after graduating.

There are 27 Canadian universities in the Computer Science Ranking for 2022.

Below are the top universities in Canada for computer science degrees.

McGill is the oldest university in Montreal and one of just three English-language universities in Quebec.

Students can test out professional paths through paid internships and can network with industry experts at the department’s annual technology fair.

McGill University is home to the Centre for Intelligent Machines, which conducts research around robotics, automation, artificial intelligence, computer vision, systems and control theory, and speech recognition. The first internet search engine was created at McGill’s School of Computer Science in 1987 by Alan Emtage, a McGill alumnus.

The University of British Columbia’s bachelor of computer science comprises eight courses, all of which must be completed by all undergraduate computer science majors. There is also a range of elective courses as well as independent study programmes that students can choose from.

Students also have the option to study for a minor in computer science.

First- and second-year students are able to take part in CS coffee chats that match them with senior computer science students.

Postgraduate students can choose from either the master’s in computer science or the master’s in data science. Some of the courses that students could expect to study during a master’s programme include artificial intelligence and computational linguistics. The courses available do vary from year to year.

The University of Waterloo’s David R. Cheriton School of Computer Science is part of one of the largest mathematics and computing centres in the world.

There is also a range of graduate programmes available at the university, among them computer science, bioinformatics and machine learning.

Although the University of Montreal is a French-language university, many of its research departments are open to creating a bilingual environment for students in graduate-level programmes. For example, course notes are often offered in both French and English, there’s the possibility of taking an equivalent course at an English-language university in Montreal, and a choice of assessment in either language.

The University of Toronto’s computer science programme has 11 areas of study to choose from at the undergraduate, graduate and doctorate levels.

After gaining a broad foundation in their first year, undergraduate students can choose to pursue either the data science or computer science programme.

A master of computer science is also available. Students are required to undertake a research project as part of the course. Students can choose to undertake research in a range of areas, including neural theory, cryptography, artificial intelligence and robotics.

There are also opportunities for students to interact with alumni through panel talks, industry nights and an Alumni-Student Mentorship Programme. 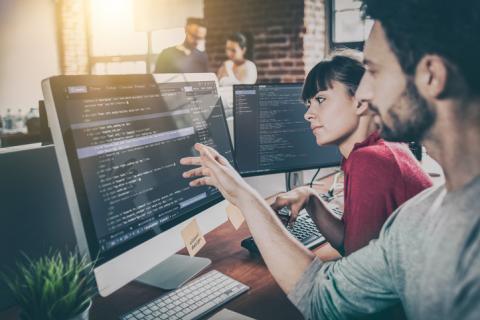