The cost of studying at a university in New Zealand

How much does it cost to study in New Zealand? If you are interested in studying in New Zealand, one of the most important things to consider is how much everything is going to cost. This essential guide breaks down the cost of every aspect of university life to ensure that you have everything covered.

There are eight main universities in New Zealand and they all set their own tuition fees, which will vary depending on subject and level of study. However the New Zealand government has confirmed plans to abolish tuition fees from 2018 for one year of study, increasing to three years of study from 2024. This is for domestic students or for students that have been living in New Zealand prior to applying to university.

As well as tuition fees, some universities will also charge administration and student services fees; for example the University of Auckland charges students $943 (£493). This will vary across the universities.

The full list of tuition fees and a comparison of costings are available on the Te Pōkai Tara site, which represents all universities in New Zealand.

Whether studying at undergraduate or postgraduate level, students will be expected to prove that they have sufficient funds to support themselves, which is $1,250 (£654) per month for any study period less than nine months, and $15,000 (£7,856) per year if the stint is longer. This amount is surplus to the amount needed to cover your course fees and return airfare.

Accommodation costs for flats and houses can vary widely across the country. For example the average weekly rent for a three to four-bedroom house in Auckland was $565 (£295) or $640 (£335) in Auckland.

A one-way ticket on public transport costs an average $2.50 (£1.31), with a monthly pass at $150 (£78). Most cities will have discounted student fares that students can take advantage of. One example is Auckland’s HOP Card, which provides students with discounts on ticket prices across the transport network.

The healthcare system in New Zealand is commendable – you will pay between $25 and $60 (£13-31) to see a doctor, and hospital costs are paid for by the state, while prescriptions are $5 (£2.60). You must be covered by medical and travel insurance policies while you’re studying in New Zealand, from the point at which you enrol until your visa expires. Health insurance is affordable even for international students – for example, 12 months of health and travel insurance cover with StudentSafe (a popular choice with students) costs $590 (£309).

Unfortunately, there are few scholarships available for international students studying in New Zealand.

Scholarships are offered by the New Zealand government. There is a useful search tool on the Education New Zealand website, with which you can search for a scholarship depending on your subject and study level.

However, full-time students are allowed to work up to 20 hours a week but it is important to check the terms of your visa, and the visa authorities may need to be contacted should you choose to work. The adult minimum wage in New Zealand is $18.90 (£9.90) per hour.

A popular choice for obtaining student discounts is the $20 (£10.50) StudentCard, which offers more deals than any other card. There are discounts on clothes, travel, food, drinks and entertainment. Air New Zealand also offers a student discount on air fares. 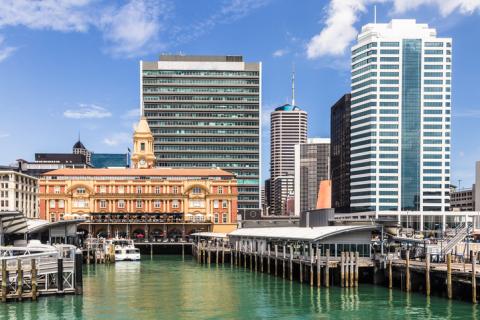 This guide outlines the cost of fees, accommodation, lifestyle and financial assistance options if you are planning to study in New Zealand