Scroll down for the full list of best universities in Scotland

Scotland’s epic history, vibrant cities and incredible natural beauty make it a prime destination, whether you’re more at home scaling a cliff or curled up with a good book.

Scotland also has a reputation for excellence in education, according to the Times Higher Education World University Rankings 2022. It has the monopoly on Britain’s share of ancient universities too. Four of the top five universities in Scotland were founded before 1600, with the oldest, St Andrews, dating back to 1413.

Its capital is Edinburgh, where the hill of Arthur’s Seat overlooks the cobbled streets and shopfronts of the old city. Once the epicentre of the Scottish Enlightenment, Edinburgh maintains a reputation for intellectual and creative passion.

Every August, the capital hosts the Edinburgh Fringe Festival, the largest arts festival in the world. Thousands of theatre and music performances take place over the three-week event.

It’s worth leaving the comfort of the cities for Scotland’s untamed countryside. The rugged Highlands are open to adventurers looking for a challenge. Ben Nevis, the highest peak in the British Isles, is a short trip from Glasgow. Further afield, Scotland is surrounded by hundreds of tiny islands, only a fraction of which are inhabited. These mysterious and isolated places have kept their traditional ways of life and are full of charm.

-Scotland’s oldest university, the University of St Andrews is located in the town of the same name on the east coast of Fife.
-It often tops rankings of Scottish universities, and is renowned for its academic rigour and excellent research.

Notable alumni include six Nobel laureates, a handful of ambassadors and the Duke and Duchess of Cambridge.

The university has a focus on sustainability and has boosted efforts to become carbon neutral. To help achieve this, it runs initiatives such as an energy-saving competition between the student halls of residence and provides green spaces on campus where students can grow their own produce.

-The University of Dundee is the youngest of Scotland’s top-performing universities, established in 1967.
-Its mission is to “transform lives locally and globally through the creation, sharing and application of knowledge”.

The city of Dundee has a rich history of scientific innovation. This is reflected in the university’s consistently strong performance in STEM (science, technology, engineering and mathematics) subjects. Students can walk downtown to visit the RRS Discovery, berthed in Dundee harbour, which carried Captain Robert Scott on his first voyage to the Antarctic.

-The University of Aberdeen is one of the leading universities in the UK for graduate employment.
- Its campuses are a fascinating mix of old and new, reflecting the subject departments they contain.

Old Aberdeen campus has a 15th-century chapel and a state-of-the-art library, where arts and humanities students can find the perfect atmosphere to study.

Life sciences and medicine are mainly taught at the high-tech Foresterhill campus. The university also has a lighthouse field station and the Oceanlab research station, for studies specialising in marine ecology. Aberdeen itself is a wealthy city, thanks to its oil industry, with plenty of upscale restaurants and bars. It is sometimes known as the “Silver City” because of its stunning Victorian buildings made using glittering granite slabs from local quarries.

-As one of the top research universities in the UK, Glasgow produces a vast quantity of internationally recognised papers.
-Glasgow rivals Edinburgh for its architecture, with more than 100 listed buildings.

Seven Nobel prizewinners and three prime ministers have studied at Glasgow. Unusually, there are two students’ unions at the university. This tradition dates from the time when male and female students attended different institutions.

-The University of Edinburgh is Scotland’s most prestigious institution.
-It is ranked as one of the best universities in the world for arts and humanities, but also for law and psychology.

Students at the University of Edinburgh have the privilege of studying in some of the oldest and most enchanting buildings in the city.

The university has inspired some of the greatest minds in Scottish history, such as the philosopher David Hume and Sherlock Holmes creator Arthur Conan Doyle. It’s also the place where Dolly the sheep became the first successful example of animal cloning.

The 10 most beautiful universities in the UK
Where did UK royals go to university?
Experiencing student nursing in the UK and the US
Women in STEM: undertaking PhD research in cancer
How to choose a UK university
10 things international students should know about studying in the UK 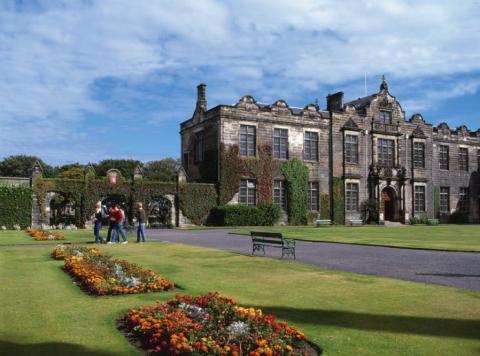 Find out all about Scotland's top universities, and explore their world university ranking performance