The UK’s second biggest city, Manchester is home to two large universities and a number of smaller institutions, so it hosts a significant student population.

Because living costs in Manchester are much lower than those in London, many students choose to study in the northern city. It also means that an increasingly number of large companies and start-ups are moving to the area, with one result being that more than half of students at Manchester’s universities choose to stay in the city for work after graduating.

These are the best universities in Manchester, according to the Times Higher Education World University Rankings 2022.

The University of Manchester is the eighth best university in the UK, according to the Times Higher Education World University Rankings 2022. It’s also a member of the Russell Group, an association of 24 leading public research universities in the UK.

Today it offers more than 1,000 degree programmes across business, science, engineering, medicine, the arts and the humanities.

Staff at the university include the famous physicist and science presenter Brian Cox. The institution’s current president and vice-chancellor, Professor Dame Nancy Rothwell FRS, is a highly respected physiologist and non-executive director of AstraZeneca.

The campus is the biggest estate in UK higher education, encompassing 270 hectares and both grand Victorian and modern buildings. The institution owns and operates an array of cultural sites including the Manchester Museum, the Whitworth Art Gallery, the John Rylands Library and the Jodrell Bank Observatory (the latter of which is a Unesco World Heritage Site). The university is also investing £1 billion over 10 years to help sustain its reputation for innovation.

The campus is home to the UK’s largest students’ union, with more than 400 societies and clubs covering topics from 90s hip hop to cognitive neuroscience.

Some 25 Nobel laureates are among its past and present students and staff. It was at the University of Manchester that Ernest Rutherford first split the atom in 1917, and in 1948 the university assisted with the development of the world’s first modern computer.

Originally formed as a centre of technology, art and design, Manchester Metropolitan University’s history dates back to 1824, and it was founded as a university in 1992. After some reconfiguration, the university is now set out over two campuses: All Saints and Birley.

The university is home to more than 34,000 students, and it offers more than 600 courses across its five faculties: arts and humanities; business and law; education; health, psychology and social care; and science and engineering. Learning takes place in modern lecture theatres and a 24-hour library. Recent investments include a new £10 million exercise and sport science centre and a £6 million contemporary arts centre.

The university is home to the UK’s second largest business school, triple accredited by EQUIS, AMBA and AACSB. The institute has also been awarded the TEF silver award for its high standard of teaching.

The university is well known for its art foundation-year programme for fine art students to hone their skills and go on to specialise in a chosen discipline at art school.

One of many names attached to the university is former poet laureate Carol Ann Duffy DBE, as creative director of the Manchester Writing School.

Eco-conscious students will be happy to learn that Manchester Metropolitan University is also one of the UK’s greenest universities and is committed to achieving zero carbon by 2038.

The university has strong links with business across the UK and beyond, including the BBC and IBM, and many courses involve work placement years with the university’s contacts and partners.

Related content
Best universities in the UK 2022 - University Rankings
Video: everything you need to know about studying in the UK
Applying through Ucas as an international student
Section
Best universities
Featured image
Image 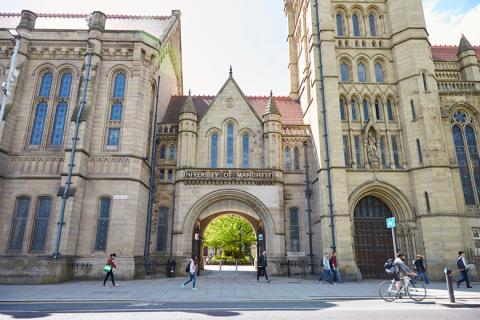