The scariest university and college movies

Halloween is the only time of the year when it is totally acceptable to turn out the lights, switch on a scary movie and terrify yourself into not sleeping for three weeks.

If you’re still shortlisting the films you want to watch this year, then perhaps consider a university-themed thriller? Many universities are home to some of the strangest myths, making them the perfect settings for dark tales. From serial killers to witches and experiments with death, here’s a list of supernatural and scary films set in or around universities to get you in the mood for a fright fest.

The Scream franchise is a classic horror series that continues to gain fans. While we would recommend watching the entire series to get the full story, if you’re looking specifically for a university-based film, press play on Scream 2.

The second instalment follows the same group of friends from the 1996 original Scream, who are students at the fictional Windsor College in Ohio. This time a copycat Ghostface killer has surfaced on campus and is killing off students one by one – and it’s up to the protagonists to unmask the culprit. This is a good choice if you are looking for a classic slasher movie with a “whodunnit” edge.

If you’re not in the mood for something that will make you jump out of your skin, Flatliners could be a good choice this Halloween. Five medical students conduct a range of experiments that reproduce near-death experiences to answer the long-standing question of what happens after we die.

This, of course, has some disastrous and terrifying consequences and leads many of the characters to question what life really means and whether it’s wise for us to know about the afterlife. The film was shot on site at Loyola University in Chicago.

For those more interested in fantasy than horror, the Harry Potter series could be a more suitable choice. Although not particularly scary, the movies feature witches, wizards, ghosts and magic, perfectly capturing the spirit of Halloween.

It follows Harry and his friends as they attend Hogwarts School of Witchcraft and Wizardry (not a university but a boarding school), learn magic and meet a range of fantastical creatures along the way. The films get progressively darker as the series unfolds so consider setting aside an entire weekend to indulge in a Harry Potter marathon.

An urban legend is a series of stories or popular folklore that is shared within a particular community and often told by people who claim to know those who were involved. Urban Legend centres around a series of murders on the campus of a university in New England, US, with each murder appearing to be modelled on a popular urban legend.

5. The House on Sorority Row

It might surprise you to know that there are quite a few films about murders within sororities (societies for female students at US universities). One of the originals and considered the best is 1980s slasher flick The House on Sorority Row. The film is about a group of girls who throw a graduation party and it all goes awry when they are steadily stalked and killed.

Other movies that fit into this specific horror niche are Sorority Row (the 2009 remake of The House on Sorority Row), Black Christmas (the original came out in 1974 with two more remakes since), Sorority House Massacre, and Pledge, among many others.

The Skulls is a thriller based on some of the legends and conspiracy theories around Yale University’s Skull and Bones Society. The lead character, Luke, is invited to join the Skulls Society at his university and soon finds that being part of this world may not be as great as he initially imagined.

The film might not be a direct portrayal of the real society but it is certainly an insight into what could go wrong when you join an elitist university society. 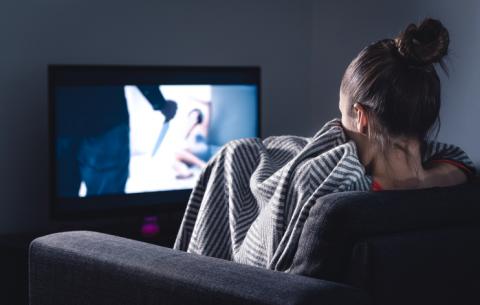 Universities are the perfect setting for a horror movie – Gothic buildings, dark corridors and large groups of curious students. We’ve compiled a list of movies set at universities to frighten yourself with this Halloween.