“We can watch our marine systems disappear, or we can come up with solutions so that they are functioning in the future,” stresses Pippa Moore, a marine community ecologist at Newcastle University.

This year heralds the start of the United Nations’ Decade of Ocean Science for Sustainable Development. The goal is to ensure that ocean science informs countries’ plans to sustainably manage their oceans. About 3 billion people – almost half the human population – rely on oceans for their livelihood. The vast majority live in developing countries, according to the Organisation for Economic Cooperation and Development. But the world’s oceans are at risk from global threats, such as climate change, as well as localised dangers such as overfishing and deep-sea mining.

Professor Moore, who recently joined Newcastle University, heads a research group focusing on marine ecology and understanding people’s impact on marine biodiversity. She investigates kelp forests, both in the UK and abroad, to unravel their structure and reveal how they function. In some instances, she uses this knowledge to help restore these underwater forests.

Kelp is a group of seaweeds that, in the right conditions, can form vast, dense forests. These underwater plants, like terrestrial trees, play a vital role in in supporting high levels of biodiversity, absorbing carbon from the atmosphere and powering coastal food webs. “We need to remove the arm-waving and provide evidence to conserve and protect our natural systems, which provide important goods and services,” Professor Moore says.

Ocean conservation is one of the UN’s Sustainable Development Goals, a collection of connected global goals designed to be a “blueprint to achieve a better and more sustainable future for all”. To protect our oceans while using them to create economic wealth, governments and policymakers need scientific evidence to inform their decisions. Part of what attracted Professor Moore to Newcastle University was its “strong focus on embedding the UN Sustainable Development Goals, not just in the research we do, but in the teaching”, she says.

When James Guest, a marine ecologist who focuses on coral reefs, received a Horizon 2020 European Research Council grant, “Newcastle University was the natural place to be based to do the work”. “It has a really long history of tropical marine research, going back over 40 years, and some really top scientists have either worked at Newcastle University or studied here,” says Dr Guest, who completed his undergraduate degree at the university.

Dr Guest is working to understand the genetic fingerprints of heat tolerance in different coral species, and breeding those species to see if the trait passes on to their offspring. Climate change is a major threat to the planet’s coral populations. As human-produced greenhouse gases warm the atmosphere, the ocean absorbs that energy and becomes hotter. Additionally, the combination of excess carbon in the oceans and higher temperatures is making the water more acidic, and some organisms may not be able to survive these conditions.

Dr Guest, who has spent most of his career living in tropical locales such as the Philippines and Singapore, believes collaboration is at the heart of good science. “It’s so much more rewarding, both scientifically and personally, if you work closely with local scientists, students and communities who know the environment very well and how your research can be of local benefit. In return, you get much greater insights based on local knowledge and can build long-term international collaborations,” he says.

If the world is to overcome its grand challenges, people must work together, both Newcastle researchers agree. “Science is global, and particularly modern science,” says Professor Moore. “From a school and university perspective, we also have great national collaborations. We have really good linkages with national agencies such as the Department for Environment, Food and Rural Affairs, the Marine Management Organisation, the Environment Agency and Natural England.”

Professor Moore’s career has also seen her living around the world, from Australia to South America. Although her work has focused on specific places – most recently she has been investigating the impact of kelp forest harvesting off the coast of Chile – her research findings are relevant to other locations and marine systems.

“We try to make our research as broad as possible,” explains Dr Guest. “The things we reveal and discover in one system could have benefits in other systems. We both work in restoration ecology, a big emerging field in marine science as it is increasingly recognised as a critical management tool in the Anthropocene.” The Anthropocene is the geological period during which humans have made a significant impact on the global landscape. “For many of the frameworks for restoration in kelp and seagrasses, we can take those and apply them in coral reef restoration,” Dr Guest says.

While both Professor Moore and Dr Guest will continue to work with international collaborators, they are also looking to waters closer to home. Dr Guest is researching ways to restore or save ecosystems through coral seeding. “The pandemic has brought home to me that I’d like to have capacity to do more research here in Newcastle,” he says, adding that the university has an impressive marine aquarium and laboratory space. One way to do this is to set up an aquarium-based coral breeding project, which he describes as his “next big goal”.

Newcastle University owns the Dove Marine Laboratory in Cullercoats Bay, about 10 miles from the university’s main campus. The original laboratory, established in 1897, comprised a single wooden hut, but it has grown into an internationally competitive research facility and remains one of the only university-owned marine stations in the UK.

Professor Moore is interested in understanding the marine biodiversity on the UK’s doorstep. “From a UK perspective, the kelp forests in the North East have received little attention but they are vast in extent,” says Professor Moore. “We in the North East live on an industrialised coastline, where coal waste was disposed on to the beaches.” Today, Professor Moore and others are working to restore the kelp forests that once thrived in the ocean near Durham. “Kelp doesn’t disperse far,” she explains, “and it is difficult to colonise areas where it has been lost historically.”

England is not the only country struggling with this problem, and the pioneering research by Professor Moore and her colleagues could help other damaged marine ecosystems. “A lot of the work we do is applicable elsewhere,” she explains.

Find out more about marine science research at Newcastle University. 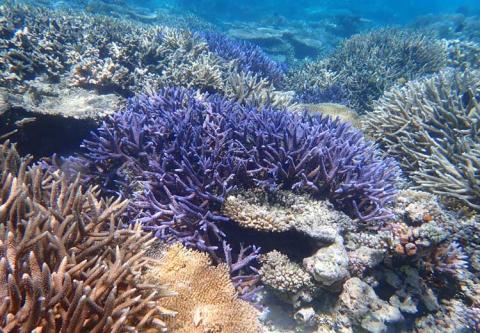