Mastering your speaking skills for the Duolingo English Test

The reasons to take a Duolingo English Test (DET) go way beyond the requirement of a university or employer to meet a certain standard of written and spoken language. If someone is attending a course in an English-speaking country, they will need to speak the language to manage their lives outside lessons – from opening a bank account to arranging accommodation.

This is why the speaking portion of the DET is so important, says Rich Forest, learning and curriculum manager at Duolingo. “Speaking is a very academic skill and there are so many situations in university where you need to speak,” he says. “For people who want to be successful and continue with their studies or work in an industry, it always matters.”

However, it’s also one of the hardest skills to master and is the portion of the test that tends to challenge test-takers the most. “With writing, you’re able to back up and revise something even if there’s a timer – when you’re speaking you also have to listen while you’re planning what to say,” Forest says. Furthermore, many students feel self-conscious about practising speaking versus reading alone or learning vocabulary, so tend to focus on it less.

Forest advises that test-takers practise actual scenarios they might encounter, whether that’s a job interview or an interaction on campus. “Make [the scenarios] different types of interactions, but the things that you want to get good at doing,” he suggests.

The Duolingo language learning app increasingly offers speaking and listening exercises for daily practice, but working with someone who’s also learning the language can be equally fruitful, even if they’re not a native speaker.

There are many informal ways test-takers can prepare for the DET speaking element, which tends to involve a short exercise such as describing a scene or talking about a given topic within a time limit. Repeated practice is key – the more someone uses a phrase, the easier it can be retrieved in a real-world situation.

If in-person practice with a friend or another student is not possible, there are many online groups that practise language skills virtually.

One of the most important elements of preparation is becoming comfortable with using the spoken language in the test environment. In this regard it’s crucial to remember, first, that the test will be taken in private surroundings so no one will be listening, and second, effective communication is more important than just pronunciation.

Forest concludes with this advice: “Being able to answer a question and make sense, or describe a scenario, is more important than people think. Focus more on overall success in communicating what you want to say than on perfection.” 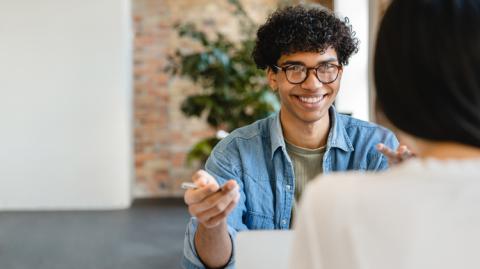 Speaking can be one of the most nerve-wracking elements of the Duolingo English Test, but it’s a crucial life skill test-takers will need in academia, the workplace and beyond