My name is Romain and I was born and raised in Bordeaux, France. From an early age, I travelled quite a lot with my parents, and even though I was a only a kid, it made me realise that there was more than one way to think, eat, dress, and live. This made me curious to experience different cultures and different ways of life.

With this mindset, I took every chance I was given to go abroad during my bachelor’s and master’s studies: I spent four months in Sweden, then did a gap year in the US.

Eventually, I started thinking about pursuing a doctorate. At that time, I did not know which topic or research field this would be in, but I was sure of one thing: I would take that opportunity for a longer stay abroad. My fiancée and I started considering our options and, within a few months, we received several hints all pointing in the same direction: Zurich, Switzerland.

You may realise that Zurich is not so far from France, but to us it already felt like a foreign place with a different cultural and linguistic environment. I had never studied German, so it also seemed like a good opportunity to learn a new language. This turned out to be more complicated than I thought, but I will come back to this point.

Zurich hosts two major research universities: the University of Zurich, and ETH Zurich. We hoped this choice would give both my fiancée and me a good chance of finding doctoral places in our respective fields of study. Things worked out well for us: in autumn 2015, we began our Swiss experience; she went to the University of Zurich and I went to ETH.

ETH Zurich regularly features among the top schools in global university rankings. While many factors probably contribute to this, I am sure that good internal organisation is one of them. One thing that struck me when I started is the amount of support available for everything. Whatever you need, someone will help you get it, and get it fast.

The efficiency of the Swiss administration system in general has been quite impressive. But maybe that’s just because I’m French...

At ETH, professors enjoy a large degree of freedom in managing their research groups, which means that your experience there depends significantly on the professor you work with. Overall, most of the people I met shared my feeling: this is a great place to study and work. I would advise any of my friends to come to ETH.

But as far as I am concerned, the best thing about ETH is that it is in Zurich. As the largest city in Switzerland, Zurich is very international, but with about 350,000 inhabitants, it is fairly small compared with a big metropolis. Life here is very active and scenic: the lake and river flowing through it make it nice and cool in the summer, with the mountains providing a stunning backdrop.

Switzerland is a small country with an amazing public transportation system. Hop on a train and in two to three hours you can be more or less anywhere, which makes Zurich the perfect starting point for countless trips, as well as a large selection of outdoor activities: hiking, biking, rowing, skiing and climbing, to name just a few. There are so many places to go and things to do! For nature lovers, Zurich really is a small paradise.

One last thing about Zurich: people here speak Swiss German, which is a dialect significantly different from German (there are even several different Swiss German dialects). Since the working language at ETH is English, and most of the local population speaks it very well, it is actually not so easy to learn German in Zurich. And in the end, I must admit I chose the mountains over the grammar books.

Read more: Most international universities in the world 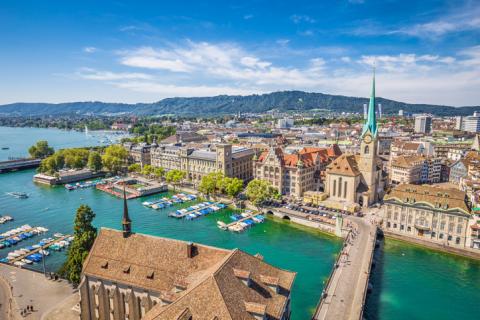