When it comes to thriving tech sectors, certain cities and locations spring to mind: London, San Francisco and Tokyo, maybe.

However, have you considered Mumbai or Frankfurt or the US state of North Carolina? According to a new series of Digital Leader rankings, these are among the top locations for a digital education.

The rankings, put together by French consultancy Emerging and published exclusively by Times Higher Education, allow students to explore which universities have a good reputation in providing a digital education and encouraging tech skills and entrepreneurship.

The ranking was put together from data collected from two surveys conducted in the past year. Among the 3,400 participants were corporate executives, start-up executives and young digital professionals. Participants were asked to vote for up to 10 institutions, from a base of 1,000 universities, that they believed excelled across six digital and tech categories. Additional data was provided by Crunchbase. The full methodology can be found here.

Top cities for a digital education

These are the hubs with the highest number of universities in the main Digital Leaders ranking. Alongside the expected digital hot spots in the US and the UK, four cities in India make it the joint most represented country alongside the US.

For students looking to study and settle down in the same place, these cities might be of interest. These are the cities that are the best at retaining tech graduates, according to the data collected by Emerging. While London and New York take the top two positions, cities in South American countries such as Brazil and Argentina feature frequently throughout the ranking.

Cities with the highest percentages of female tech managers

These cities had the highest percentage of female tech managers, according to the participants of the Emerging survey and the Crunchbase data. 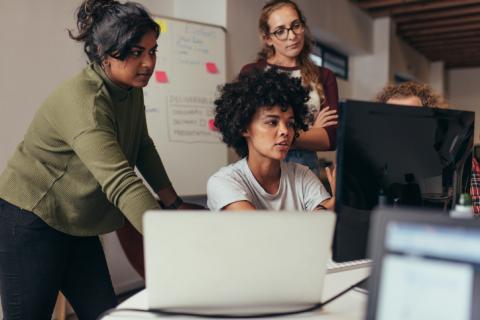