Do bankers deserve the pay they receive?

Your answer to this question may not actually cut any bankers’ bonuses, but it could secure you a place at one of the best universities in the world.

The University of Oxford interview process is often perceived as a way to catch prospective students out, but this isn't actually the case. Instead the aim of the interview is to determine how students approach questions in their chosen field of study and how they think critically about the answers.

Whatever you hope to study, these insights could give you the edge you need to impress when it matters most.

With exceptions for some practical questions in science or medical subjects, the interviewers are not always looking for a straightforward answer.

Some questions, such as moral or philosophical questions, don’t have an answer. But even when there is some way of telling “right” from “wrong”, more often than not the interviewer is not asking what you might think he or she is asking.

Take the following example from an economics and management interview:

Do bankers deserve the pay they receive? And should government do something to limit how much they get?

On the face of it, this looks like an ethical question. If it had been asked in a philosophy interview, deliberations on fairness and the ethics of pay would be wholly appropriate.

But in an economics and management interview, you have to expect a discussion about economic theory.

To really impress, candidates would have to give a case for whether or not the banking industry operates a competitive labour market, and whether the industry as a whole is competitive – i.e whether disproportionately high profits, in part distributed in salaries, are the result of uncompetitiveness.

Questions in interviews are often simply phrased, but they are in fact designed to challenge some deeply held assumptions you may have, or to tease out some relevant theory. Every question is an opportunity to show how you think, not necessarily what you think, so don’t fixate on getting the right answer, or even an answer at all.

But don’t ignore the obvious

Can archaeology “prove” or “disprove” the Bible?

In this example your instinct is probably correct: no, archaeology cannot prove or disprove the Bible, because the evidence and relationship between evidence, text and religion is far more complex than the question allows for.

Perhaps this answer seems just too obvious. But again, what matters here is not your answer but your discussion points.

The important thing here is not to doubt yourself too much. Most questions don’t have an obvious answer, but some do, so if something is instinctive to you, don’t disregard it just for its simplicity. Even if this means you come to the same conclusion as many other candidates, the interviewer will give you credit for saying something interesting, relevant and thoughtful.

Oxbridge and the Ivy League: tips for applications
Tips for acing your University of Oxford interview
10 common college interview questions (and how to answer them)
How to prepare for an online university interview

Given limited time to test your abilities, interviewers will ask big questions to cover a range of concepts, and they expect big answers too.

In a philosophy, politics and economics interview, for example, the questions could well cover all three subjects.

Why is income per head between 50 and 100 times larger in the US than in countries such as Burundi and Malawi?

An answer might address differences in technology, capital and other resources, and the relationship between technology and productivity. Candidates could go further and think about the role of education, infrastructure, trade and law in sustainable development, and the impact they have on income.

Nerves can often provoke otherwise chatty students to give short and decisive answers, or to overly focus their answer on one point. Lateral thinking is really the key to demonstrating the extent of your ability, so try to talk at length about a range of relevant concepts, and bring in any overarching theory that could guide your answer.

Not all questions are designed to take you beyond what you already know. Some questions want you to use what you have already learned in school in an unfamiliar context.

In a biomedical sciences interview, candidates will likely have come across many of the fundamental ideas in biology and chemistry already, but will not have any clinical experience or have asked deeper questions about why things happen as they do.

For this reason, one interview asks: why is sugar in your urine a good indicator that you might have diabetes?

This question builds on general knowledge and material studied at school in biology and chemistry to assess how students approach a clinically relevant problem.

All the relevant science will have been covered in school, but the answer requires students to make some connections for themselves. The interviewer will guide the student to think about why glucose is not normally found in urine, and what relevant differences there are in diabetic patients, drawing on kidney filtration and then reabsorption through carrier proteins.

Generally, the real trick is identifying which elements of your existing knowledge will be helpful. In the example above, students don’t just need to understand diabetes and renal function, but also reabsorption. In other cases, you will have to make connections with ideas you’ve gleaned from outside the classroom. No topic or fact is off limits.

Contrary to the legends, the interviewers aren’t actually hoping to catch you out. In fact, it is more likely that they will gently guide you through their brain-teaser.

Sometimes students may set a practical test such as the one below.

Place a 30cm ruler on top of one finger from each hand. What happens when you bring your fingers together?

Most students will guess, incorrectly, that the ruler will fall off on one side based on which finger was closest to the centre to start with.

But in fact, this makes no difference and both fingers will reach the centre of the ruler at the same time, with the ruler balanced on top.

These tests will be designed to help candidates react to an unexpected results.

The discussion will move on from there, but the crucial thing to remember if you get stuck on practical questions, is that the interviewers want to understand how you think, not stump you completely. So pay attention to any hints they offer.

Mathematics, philosophy, computer science, psychology and many other subjects require a persistent and precise mode of reasoning. In these interviews, one question could take a significant amount of time and energy to work through, perhaps even requiring repeated iterations of the same method.

For example, the following question from an experimental psychology interview says:

Imagine that 100 people all put £1 into a pot for a prize that will go to the winner of a simple game. Each person has to choose a number between 0 and 100. The prize goes to the person whose number is closest to two-thirds of the average of all the numbers chosen. What number will you choose, and why?

The solution has a “recursive nature”. The candidate, after initially choosing a number he or she hopes is closest to two-thirds of the average of all chosen numbers, must expect that others will also choose the very same number (for the same reasons). This then requires choosing a different number (two-thirds of the average of those updated chosen numbers), but then the whole process starts again.

Ultimately, everyone will settle on zero as their choice, and this is the formal solution, although it raises more questions about rational choice and actual choice than it actually solves.

Interviewers are less likely to want a single answer but are interested in seeing how people think through a problem, figure out what are the relevant factors, respond when new information is provided and so on.

With a question like this, and similarly complex problems like "how do pirates divide their treasure" [under computer science], the answer involves a bit of a slog. But do not give up: every step you take is even more evidence of your clear-thinking and problem-solving skills. 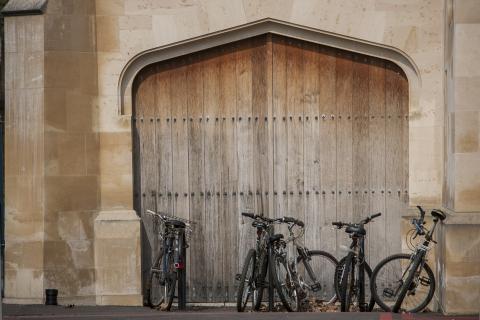 The University of Oxford interviews are coming up very soon and here are some tips on preparing. And even if you aren't interviewing for Oxford, these are tips you can use for any university interview questions.