Everything you need to know about studying in Canada

Canada is a popular study destination for many international students, and with good reason.

With 10 provinces and three territories spanning majority French-speaking Quebec on the Atlantic east coast to British Columbia bordering the Pacific Ocean, Canada is known as a multicultural country with a diverse heritage. As well as regularly being ranked among the best nations in the world for quality of life, Canada also has a global reputation for academic excellence.

With consistently high levels of education spending, it has almost uniformly high standards of higher education. Several of its institutions feature among the global top 100 universities in the Times Higher Education World University Rankings every year.

Canada can also provide cheaper study options than most anglophone countries, as well as simpler application processes and more opportunities for permanent residency after graduating.

It’s therefore no wonder that 95 per cent of international students in Canada said they were satisfied with their experience studying in the country, according to a 2021 survey by the Canadian Bureau for International Education.

However, studying abroad requires a lot of preparation and research. The process from first contemplating embarking on a degree programme internationally to actually moving to your chosen destination usually takes more than a year.

Here we break down everything you need to know if you’re considering studying abroad in Canada, including how the university system works, how to apply for entry, language tests, average degree and living costs, scholarship opportunities, visas and what you can do after graduation.

How does the Canadian university system work?

Canada’s higher education system includes private and public institutions, and there are two main groups of universities: the U15 and Universities Canada.

The U15 is an association of 15 Canadian research universities and includes the country’s older and more prestigious universities, such as McGill University, the University of Alberta and McMaster University.

Universities Canada represents a range of universities as well as post-secondary colleges, which offer a mix of professional, vocational and training courses in fields ranging from culinary arts to business analysis.

Canada typically offers university degrees as four- or five-year programmes, while college degrees are shorter, about two or three years.

Different universities in Canada have different frameworks for choosing subjects and courses within your degree. Check the specific requirements for every institution you’re interested in.

When you apply to a Canadian university, you’ll typically choose a general area of study that interests you, such as arts, science, forestry or kinesiology. You’ll then have the option of specialising further after a year or two of study.

Some Canadian universities use the major/minor system. The main subject you want to study is known as your major, and it will be the main focus of most of your classes. Your minor is another subject you take alongside your major, usually in the first or second year.

Most universities operating this system in Canada will expect you to have an idea of your chosen major when applying, as well as possessing the qualifications that are relevant to that subject.

There are also options like dual degrees or double majors, which allow you to focus on a balanced combination of subjects to suit your chosen career. For example, music and management would be a good combination for someone who wanted to go into live events.

A number of Canadian institutions even offer the opportunity to customise your degree to your interests beyond the classroom. You might want to go into undergraduate research or gain international experience through studying at partner universities across the world. Many Canadian universities also provide international students with cooperative education programmes, which are paid, full-time placements in a variety of work settings relevant to your degree.

How do you apply to study in Canada?

Canadian colleges have several different intakes, or times when you can apply. These include a September, a January and a May intake. The September intake is by far the most popular, and most universities in Canada are organised around a September start.

Applications usually open 11 months before a programme starts. Deadlines vary for each institution, but most need to have received your application by spring at the latest.

In addition to your academic performance, Canadian universities will sometimes consider supplementary information such as a written personal profile, a video or a portfolio. Recommendations or reference letters are generally not required.

In all other Canadian provinces, you apply directly to your institution of choice. When applying directly to institutions, you'll usually pay a separate application fee for each university you apply to.

Do I need to do a language test before studying in Canada?

Canada is a bilingual country, and most courses are taught in English or French. If you’re not a native speaker of either, you’ll likely be required to pass a language test as part of your application.

For English, the most popular language proficiency test is the IELTS – usually the IELTS academic test, not the IELTS general test – but other common exams include the TOEFL and the Cambridge English Advanced Test.

For French, the most common tests include the TEF, the TCF, the DALF and the DELF.

What is the cost of studying in Canada?

Each university in Canada chooses how much it will charge its students for tuition, depending on the programme, the student’s home country, the province and the degree level.

You’ll be able to discover what your tuition fees are by checking each university’s website.

It is also vital to remember that tuition won’t be your only expense.

Under Canadian student visa requirements, you are required to have at least C$10,000 (£6,281) (or C$10,000 if you are studying in Quebec) surplus to your tuition fees to prove that you can cover yourself financially, although the real cost of living is usually higher than this. Canada also charges for compulsory health insurance, and the exact cost of this varies across the provinces.

You’ll also need to budget for your lifestyle, food, course supplies and bills. The University of Montreal estimates that students need a total of C$15,050 (£8,802) per year to cover housing, books and course supplies, phone bills and other expenses. The University of British Columbia puts the figure at C$15,500 (£9,066). Vancouver is the most expensive city in Canada, with particularly high rental costs. Cities in Quebec are some of the cheapest.

Many businesses, shops and restaurants offer discounted student rates with proof of course enrolment (student card or a student discount card). Reductions vary from 10 per cent to 50 per cent, meaning students can live on a budget and still enjoy their time in Canada. AirCanada also offers reduced airfares for students.

What scholarships are available for international students in Canada?

To adhere to Canada’s student visa regulations, students must prove before they start a course that they have enough money to meet their financial needs while studying in the country. There are scholarships, grants and bursaries available for international students at both undergraduate and postgraduate levels – as long as they can show proof of savings.

It’s important to begin researching these options early as scholarship funding is highly competitive and in limited supply. Each Canadian university has different opportunities for funding, and their websites will provide information on scholarships and financial awards for international students.

Most of these scholarship programmes are merit-based, meaning that your previous academic performance will determine whether you are eligible. However, there are also financial scholarships based on financial need, as well as country-specific scholarships, which tend to target developing countries.

The Canadian government also provides a selection of scholarships for international students, as does the private sector.

Although funding support is available, most international students will need to plan on self-financing the majority of their Canadian education and living costs.

How do I apply for a study visa in Canada?

In Canada, student visas are known as study permits. A study permit is a document issued by the Canadian government that allows foreign nationals to study at a designated learning institution in Canada.

Before you come to Canada, you’ll need to apply for a study permit if you’re going to be at university for more than six months.

You can’t apply for the permit without an acceptance letter from a Canadian university, so you need to know where you’re going to study before you can begin this process.

It will be your own responsibility to secure a study permit, but a number of universities offer step-by-step guides or checklists to help you work through the process of gathering documents and information.

Your study permit will allow you to work on or off campus without applying for a separate work permit, within certain restrictions. Should you wish to remain in Canada after graduation to obtain some work experience, you are able to pursue this through Canada’s Post-Graduation Work Permit Program.

However, your study permit is not the same as a regular visa that allows you to enter or travel to Canada. For that, you need to apply for a travel visa or an electronic travel authorisation (eTA) as well as your study permit. This can be done online, and you will need a valid passport, a credit or debit card, an email address, and you must answer some questions. It only costs C$7 and is a reasonably straightforward process.

What can I do after I graduate in Canada?

A big benefit of studying in Canada is that upon graduation, you may be eligible for the postgraduate work permit programme, which allows graduates to stay and work in the country.

As a top destination for higher education, there is ample opportunity to pursue a career in academia in Canada. Pursuing a PhD in Canada is generally cheaper than in the US, and some Canadian universities have even been known to reduce or waive international fees for promising candidates.

Successfully completing a doctorate at a Canadian institution will entitle you to work in Canada for a further three years, after which you can pursue pathways such as permanent residency or even full citizenship. You can also use the Times Higher Education jobs lists to search current academic vacancies.

Different provinces offer different opportunities. Alberta, for example, is known as Canada’s energy province, with leading oil and gas, energy, science and engineering industries. Some provinces, such as Manitoba, even have a dedicated stream for international students to help meet the needs of their industries. Many Canadian universities will have dedicated careers services and mentoring to help you find your feet in the professional world.

If you're interested in applying to a university in Canada then you can explore all the universities in Canada in the table below.

All figures and conversation rates were correct at the time of publication. 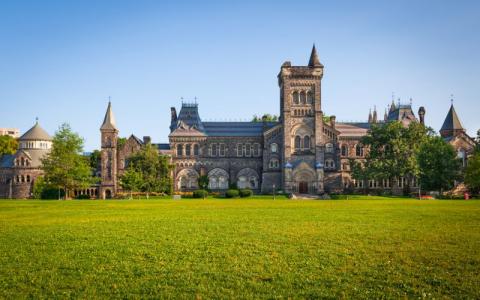 Want to study abroad in Canada? Learn about higher education in Canada and how to apply for university in Canada as an international student