What can you do with a mathematics degree?

In education systems across the globe, from primary to higher education learning institutions, there is one constant subject, a language universally spoken: mathematics.

A basic definition of mathematics (or maths, or math, depending where you are in the world) is that it is an education in numeric sciences, using a range of different approaches including algebra, calculus and basic arithmetic. While mathematics is a key element of subjects ranging from economics to physics, maths as a university subject often focuses on understanding and testing theories in mathematical and scientific discourse - or"pure mathematics".

Mathematicians can come to both an understanding of the universe’s building blocks in fields such as quantum mechanics, and have the chance to be educated in fascinating theorems and abstract concepts, which teach students a number of applicable skills that are transferable across a number of professional fields.

What jobs can you get with a mathematics degree?

Some common careers for mathematics graduates include:

What do you learn on a mathematics degree?

Within a maths degree, a student may expect to find a higher level of contact hours in the first year of study, as professors work with students to ensure an understanding of the core modules and concepts being discussed in lectures and seminars.

A typical course for a first year undergraduate will be an introduction to abstract algebra, as well as fields such as non-linear differential equations. Later years in the degree will see a greater level of freedom as students will pick from a wider selection of modules and explore in greater depth the areas of mathematics that appeal to them.

Maths is also an ideal joint honours subject, as its teachings can be a foundation for study in computer science, engineering and statistics among others. For an undergraduate course, a typical course length would be three years, though this may be four in countries such as the United States, or if the course includes a year abroad study or a sandwich work placement.

What should I study if I want to study mathematics?

Maths is not a subject that can be taken up at university, and will be taught on the assumption that students will have a concrete understanding of basic concepts in maths and applied mathematics before beginning a course.

Universities typically accept students who have done well in maths at school and further education level before applying. Universities will look at aptitude in related school subjects such as the traditional sciences (such as chemistry).

It is also important that language and writing skills are not neglected, as many courses will include lengthy essay assignments.

What do people who study mathematics do after graduation?

All kinds of employers will value the data analysis skills and the innovative, original thinking that can be taught in a maths degree.

Dionne O'Brien studied mathematics at the University of Cambridge, where she specialised in abstract algebra and and graph theory. "I didn’t know exactly what I wanted to do after I left university but I had decided against going into research. This meant it was unlikely I would be using the abstract maths I was specialising in in my future career," she says.

"What I liked about studying mathematics was the feeling of understanding then solving puzzles. I wanted a job that would give me that same feeling, but where I would also get to interact with lots of different people," she adds.

Now, Dionne works as a technical consultant for the application building platform Appian. The role requires a mixture of communication and teamwork skills and the ability to understand technical problems and come up with technical solutions.

"Both sides of my job have parallels with solving a problem in mathematics; it takes time to understand and map out what the client wants, then you have to work out the neatest, most efficient way to create that with the tools available. One of the most useful skills I learnt at university is the ability to persist with new concepts, that initially seemed complex, until I understood them," she adds.

There are many career options available for maths graduates in including investment analysts, tax advisors, economists, data analysts, teachers and many others.

In a position such as an actuary or chartered accountant, a mathematics degree is only a first step, as qualifications for these professions require years of further training and examination.

Maths is also a subject closely interlinked to statistical analysis. This presents job opportunities in social research such as the compilation of survey and polling data, as well as in scientific studies in fields such as geography and medical statistics. While this work can be a source of full time employment following a bachelor’s degree, many institutes also offer postdoctoral positions as a research fellow or equivalent.

There is also a clear pathway from the computer based skills learned in a mathematics degree to an IT or software development based career. Many video games programmers come from a maths background, combining creativity with technical aptitude to develop products in one of the fastest growing industries today. Security agencies will also employ a team of trained mathematicians, who will be using some of the most powerful computers in the world to develop cryptography and internet security.

Among the most well-known people ever to take a maths degree is Albert Einstein, who at the age of 17 was already on a mathematics teaching programme at ETH Zurich.

Among many other notable maths pioneers is Emmy Noether, who studied the subject at Erlangen University and went on to make seminal contributions to physics and abstract algebra.

A maths degree can also be a springboard to entrepreneurial success, such as Sergey Brin who studied at the University of Maryland before co-founding Google and Reed Hastings, co-founder of Netflix, who has a bachelor’s degree in maths from Stanford University.

Other famous mathematicians include model Cindy Crawford, who studied the subject at Northwestern University and former professional wrestler and star of The A Team, Mr. T, majored in the subject at Prairie View A&M University. 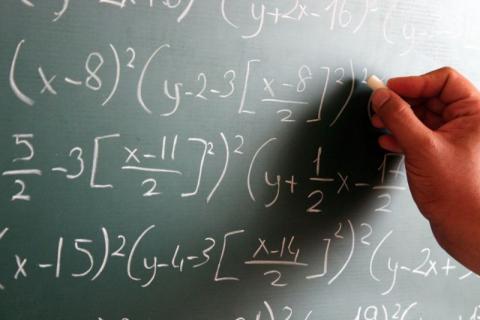 Why should you study maths at college, what jobs can you get, and how hard is it to get a place?