What can you do with an agriculture degree?

Agriculture is both the theoretical study and practical application of farming, such as the cultivation of cereals.

Since the Bronze Age development of the Fertile Crescent in the Middle East birthed modern civilisation, agricultural advances have come to define human progress.

Following inventions and innovations ranging from the seed drill to fertilising crops by drone, the past few centuries have seen farming become a science.

However, there still remain huge opportunities for research and development in the agricultural sector, which to this day is one of the largest employers worldwide. Careers can be forged in both the ongoing schemes to eradicate food poverty through education of self-sufficient farming methods and soil sciences, and in the groundbreaking developments of genetically modified (GMO) crops - or even synthetically manufactured meat.

Best universities in the world for life sciences

Best universities for life sciences degrees in the UK

Best universities for life sciences degrees in the US

What do you learn on an agriculture degree?

A degree such as agricultural sciences will study the practice of farming both in microcosm and the wider picture, and in doing so will explore the ethical and environmental solutions to feeding a global population that continues to expand. Courses can include modules such as cropping and pasture sciences, and plant nutrition.

Agronomy will focus on particular on plant and soil sciences, working with businesses to finds ways to both optimise yields and foster sustainable farming. Agricultural economics, meanwhile, will incorporate applied economics with incisive research into agriculture, analysing finances and the impact of finance systems such as tariffs on industry, while also exploring ways to maximise the utilisation of natural resources.

Most undergraduate curriculums will mix core modules such as public policy, data analysis and environmental sustainability, with electives such as applied econometrics or livestock production science.

A BSc, or undergraduate degree, in agriculture will be a three or four year course, though applied research can be taken to a doctoral level. Many courses will be closely associated with local industries, and may even maintain a micro-farm on site for students.

Students can take a third year in a work placement, using the skills learned in their degree to practical use. Year-long placements at an overseas institution are also an increasingly common aspect of agriculture degrees, for students learning about varied arable environments and the different approaches to farming found abroad can be an invaluable experience in a globalised environment.

What should I study if I want to study agriculture?

Study of the sciences are at the core of any agriculture degree, and a student must make sure to be well versed in the basics of chemistry and mathematics before applying. Economics can also be an important part of agriculture, and a course such as business studies may teach a student skills that are applicable to their further studies.

The most valuable science to study prior to studying agriculture is biology, which is an important element of the subject in areas such as the breakdown of plant life and people’s dietary needs. An additional subject to study before applying for university or selecting your major in agriculture is geography, for courses involving skills such as data collation and topography are applicable to the subject.

Agriculture is a mix of academia and practical work, and for that reason those who have spent time working on or merely being present at a farm, can produce a résumé that gives them an edge over other students.

The adequately sized university?
Why is going to a small university beneficial?

What jobs do people who study agriculture do after graduation?

Perhaps most obviously a role for a graduate in agriculture could be as a manager on a conventional farm, or a specialised unit on a farm. With dedication these jobs can be both well paid and highly rewarding positions, overseeing crucial roles of food production in society and learning skills in overseeing a team that can be applied across sectors.

The biotechnology sector is a wide umbrella, offering many different career paths for agriculture graduates. A consultancy role at a large firm is one such career option, with more scientific background allowing for involvement in the work such as genetically modified crops, or a more economic skill set being conducive to trade and business negotiations.

Practices by biotechnological and multinational agricultural industries are often highly controversial, and a position as an auditor or regulator ensuring they continue to abide by law and ethical standards is another potential position for an agriculture graduate.

Expert knowledge of a multi-billion dollar industry can also lead to wider entrepreneurial opportunities, such as devising improvements in pre-existing products. Many trade publications focus on country living and the farming industry too, which can allow agriculture graduates with strong language and research skills to use their proficiency in a journalistic field.

There is no shortage of famous agriculture graduates. American educator Booker T Washington studied at Hampton Agricultural Institute, before going on to lead Tuskegee University from 1881. Agricultural scientist George Washington Carver was the first head of Tuskegee’s Agricultural Department and developed techniques such as adding nitrogen to depleted soil, and popularised peanuts as a cash crop.

Orville Redenbacher, most famous for his branded popcorn, has a degree in agronomy from Purdue University. Norman Borlaug, a Nobel Peace Prize winner known for averting a mass starvation on the Indian subcontinent through the development of dwarf wheat, studied at the University of Minnesota’s College of Agriculture. 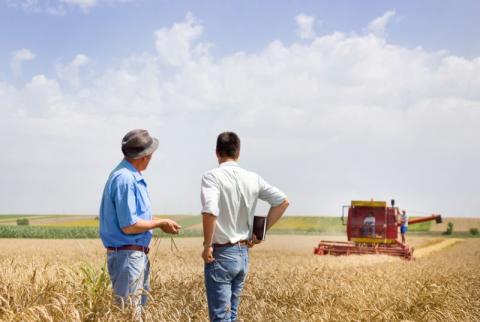 Why study agricultural science? An essential guide to your degree in agriculture, with information on what you will learn, what jobs you might get, and how to make sure you get on the right course