European universities compete with US in Arts and Humanities

European universities are beginning to compete with North American institutions in the arts and humanities, as revealed by the 2016 subject ranking released today.

Many of the highest-placed European universities in the ranking have moved into the top 20 for the first time this year. In total, 13 of the top 20 are in North America and seven are in Europe.

The developments could attract more international students to Europe for arts and humanities programmes, particularly given that, for many international applicants, ranking plays a very important role in university decisions, according to recent research.

Leiden University in fact has the lowest proportion of international students out of all the universities in the top 20.

But like many other institutions in the Netherlands, it hopes to attract more applicants from abroad for a distinct cultural experience, with its high-quality research and teaching and a wide choice of English-language degrees.

Tobias Jones, from the UK, is studying for a master’s degree in Middle Eastern studies at Leiden University, which he chose on the basis of a recommendation from tutors at his undergraduate university – St Andrews in Scotland – and because of affordable fees.

He said: “I think resources are a large part of why Leiden is successful, as the library is very impressive and through being a student at Leiden you can access countless online databases as well, which normally you would have to pay exorbitant amounts for.”

He also testified to the appeal for international students.

“I was surprised by how many different people from around the world I have met here, and I have really enjoyed the social aspect of meeting people from different cultures. The number of languages people at Leiden speak is quite astonishing!

“I am learning things I never thought I would, and the beautiful city with its quaint canals and cobbled streets certainly contributes to this atmosphere.”

In general, UK universities at the top of the arts and humanities ranking have a significantly higher percentage of international students than their North American counterparts.

London seems to attract the most international students. King’s College London has one of the highest proportions of foreign nationals at 37 per cent, behind only University College London, where almost half the student population (46 per cent) are from overseas.

Kate Presnukhina, from Russia is studying for an MA in Culture and Creative Industries. She was attracted to London, and to King's in particular.

She said: "I was choosing a place to do my postgraduate degree and, apart from the league tables, what mattered to me was the academic staff at my future department. Why did I decide that King’s was my top choice? It was the only programme that offered a unique course run in collaboration with the Tate Modern.  It felt like King’s could not only offer the best central London facilities for studying and research, but also provide a vital link to the industry."

Three Canadian universities are counted in the best 100 for humanities. The best Canadian university for arts and humanities, and indeed for other subjects too, is the University of Toronto, where more than 66,000 students are currently enrolled, only 15 per cent of whom originate from outside the country.

Mobolaji Edun, from Nigeria, is studying interdisciplinary programmes within humanities at the University of Toronto. She chose the university due to its world-renowned reputation, exciting location and diverse population, and said she appreciates the student-teacher relationships and opportunities for academic growth.

She said: "U of T is not a detached place – it provides you with the chance to build your own community, as long as you make the decision to be active in doing it."

Student Catt Filippov agreed that arts and humanities at the University of Toronto provide opportunities for personal and academic growth, in spite of concerns that these subjects are not as useful as other disciplines.

She said: "There seems to be a lot of trepidation about majoring in a subject that will serve no purpose past the point of graduation. Even my father, in his thick Russian accent, has said 'Ok, you do engineering - you become engineer. You do English, what do you become? An Englishman?' But what's great about UofT is that a student can combine different fields of study to better suit their strengths and interests."

Resources: explore the rankings by subject

- Best universities for arts and humanities

Byline
Carly Minsky
Related content
Oxford is best in the world for medicine, but London is best place to study
Best universities in the world revealed: THE World University Rankings 2015-2016
Universities in mainland Europe go head-to-head with the UK
Hoping to apply to a US university as a foreign student?
Where did you grow up? It could affect your choice of US university
Section
News
Featured image
Image 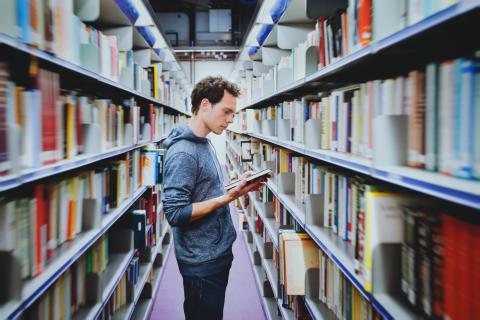