The universities with the highest percentage of international students 2022

The higher education world is getting smaller as more and more students are choosing to study abroad. Students are looking to universities to provide an international experience, the opportunity to study alongside people from all over the world, and to give them a truly global community in which to study.

Macau University of Science and Technology is in first place, with 88 per cent international students, while Near East University takes second place.

Countries represented in the top 20 include the UAE, UK, Ireland, Germany, Switzerland and Australia.

Scroll down to see the top 200

Macau University of Science and Technology is a relatively young university, having been established in 2000.

The university is made up of 10 faculties including social sciences, sciences, law, management, business, medicine, pharmacy, tourism, art, communication, and languages.

To reflect its international student cohort, the university teaches programmes in English, Chinese, Portuguese and Spanish.

The university has established partnerships with more than 200 institutions in Europe, America, Australia, Mainland China, Taiwan, and Hong Kong to facilitate student and academic exchange programmes.

Near East University is the largest university in Northern Cyprus. It has 16 faculties with 90 departments.

Students from more than 100 nationalities are enrolled at the university.

Most of its courses are taught in English.

Students come from more than 110 countries, including India, Nepal, the US, Albania, Pakistan, Morocco and China.

The university has more than 120 partnerships with other institutions from around the world. Students are either able to choose their own programmes of study from the course catalogue or opt for a pre-selected study track.

Eastern Mediterranean University is the second university from Northern Cyprus to feature in the top five.

The main languages of instruction at the university are Turkish and English.

The institution organises student exchange programmes in 13 countries including the US, Canada, Italy, Austria, South Korea and China.

International students are able to apply for 50 per cent and 25 per cent scholarships.

The American University of Sharjah is a relatively small university with just over 5,000 students, and 77 per cent of this student body is international. Some 99 countries are represented on campus, and some of the main home countries of these students are the UAE, Egypt, Jordan and India.

English is the main teaching language and the university offers 26 majors and 45 minors at undergraduate level, and 13 master’s degree programmes.

The university is a member of the Association of American International Colleges and Universities, an organisation that delivers higher education based on the American liberal arts model outside the US.

Video: how to choose which university or country to study in
How joining a society helped me settle in as an international student
Nine tips for students studying abroad for the first time

The top 200 universities for international students 2022 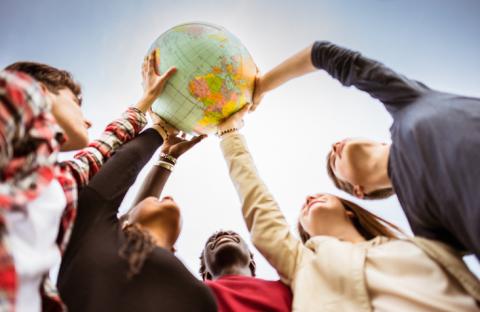